The Australian Competition and Consumer Commission (ACCC) has fined two companies for allegedly false and misleading representations in its advertising and marketing material.

Revtech Media, the company behind group-discount website One Big Switch (which is part-owned by News Corp), has paid penalties of $25,200 after the ACCC issued two infringement notices for alleged false and misleading energy price representations.

Between July and November 2017, One Big Switch advertised a 27 per cent discount for consumers in south east Queensland who switched to Click Energy’s ‘Big Switch Up’ offer.

The ACCC alleged this representation was false or misleading because calculation of the 27 per cent discount was based on rates under the Big Switch Up offer which were higher than Click Energy’s ‘standing’ offer rates.

One Big Switch also advertised that consumers would save up to $372 a year if they switched to Click Energy.

The consumer watchdog alleged the advertised savings were false or misleading because they were based on a comparison between Click Energy’s discounted market offer and the undiscounted ‘standing’ offers of EnergyAustralia, Origin and AGL. 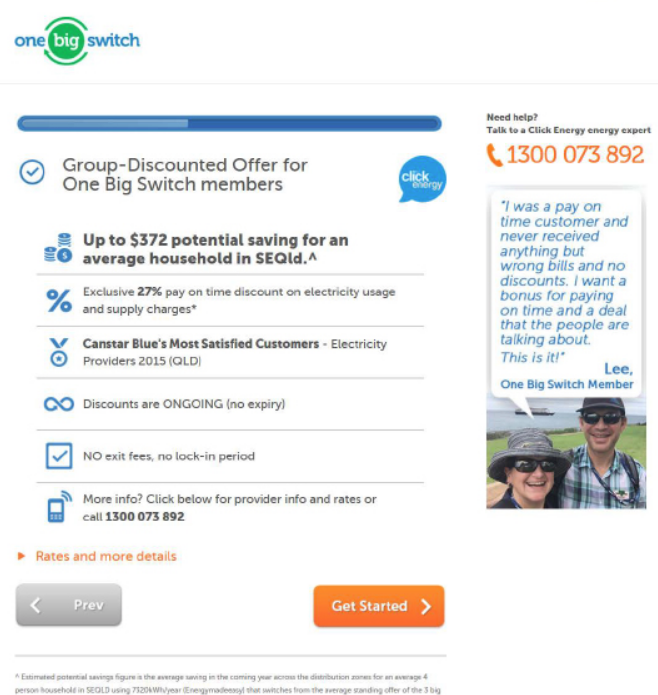 The ACCC also alleged that One Big Switch did not know what a particular customer was paying under their current plan with another retailer, and so did not have reasonable grounds to estimate the savings which could be achieved by switching.

ACCC chairman Rod Sims said the actual savings for some consumers were much less than the amount advertised by One Big Switch.

“We allege that as a result of these claims, consumers were misled into assuming they were getting bigger discounts and savings than they would actually receive,” he said.

Between December 2017 and April 2018, MyRepublic marketed its NBN services using statements such as “up to nbnTM100 Speed Tier” and “nbn™50 Speed Tier” on its website.

The MyRepublic website contained fine print disclaimers that the ACCC considered were ineffective as they were not prominent and did not provide clear information.

ACCC commissioner Sarah Court said: “We were concerned that MyRepublic’s use of the NBN speed tiers misled consumers to believe they would get broadband speeds of, or close to, 100Mbps and 50Mbps during all or almost all of the time, when that wasn’t the case.

“NBN speed tiers indicate the maximum performance of a broadband service, but a number of factors, including congestion during busy periods, affects the actual speeds consumers will experience.

“When choosing between broadband services, consumers need accurate information about the performance they should expect, particularly during busy periods.