Some 9.8 million Australians now have a Netflix subscription with the SVOD provider set to eclipse the 10 million mark sometime in September according to new data from research firm Roy Morgan.

According to the numbers, Netflix’s growth in Australia is indeed impressive, up some 30 per cent year on year.

And it’s not just Netflix Aussies are turning to. Over 13 million Australians have access to some form of pay TV/subscription TV, up 11.7 per cent on a year ago.

Netflix’s main rival Stan has over two million subscribers, an increase of 39.2 per cent on a year ago.

There were other big increases including for the rebranded YouTube Premium (formerly YouTube Red), now with over 1 million users, up 38.5 per cent on a year ago. While the biggest percentage increases were for Fetch, up 40.5 per cent to 710,000 users and Amazon Prime Video, up 87.7 per cent to 273,000 users. 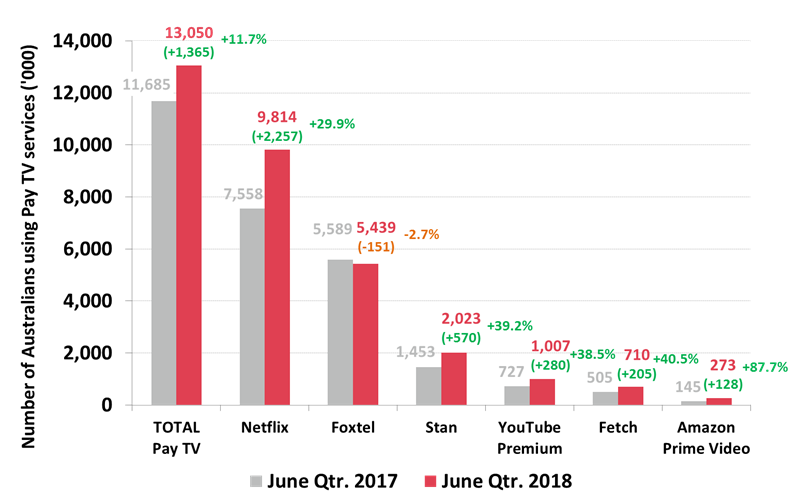 Commenting on the results, Roy Morgan CEO Michele Levine said: “Over 13 million Australians now use Pay TV/Subscription TV services. Growth for the leading SVOD providers has continued over the last year at over 25 per cent for Netflix, Stan, YouTube Premium and Fetch. New entrant Amazon Prime Video grew by nearly 90 per cne tover the past year off a small base although the Australian service only fully launched in Australia in June 2018.

“Leading streaming video provider Netflix is fast closing in on 10 million users spread across nearly 3.9 million households. 9.8 million Australians aged 14+ used Netflix in the June 2018 quarter which gives Netflix a market penetration of 48 per cent among Australians aged 14-plus.

“However, although Netflix clearly is well ahead of its rivals, other SVODs are also growing strongly – and generally at a faster rate than even Netflix.

“Stan, the joint venture between new merger partners the Nine Entertainment Company and Fairfax, grew its user base by nearly 40 per cent over the last year to top two million users in the June 2018 quarter.

“The proposed merger between Nine and Fairfax consolidates ownership of Stan and opens up multiple opportunities for cross-promotion of the new company’s various media brands such as the Nine Network channels Nine, Gem and Go!, and leading Fairfax mastheads including the Sydney Morning Herald, The Age and the Australian Financial Review.

“In a changing media landscape, highlighted by the recent merger agreement between Nine and Fairfax, the impressive performance of SVOD in recent years shows there are avenues to growth for incumbent media businesses challenged by new entrants into the market,” Levine said.