Mary Meeker (above), the famed US venture capitalist from Kleiner Perkins Caufield & Byers, has delivered her annual internet trends report, arguably one of the most sought after tech/ad/marketing documents of the year. You can read the full 2017 report here.

Each year the report examines what’s happening with internet adoption, smartphones, advertising, e-commerce, entertainment, gaming, healthcare; with a focus on emerging nations such as India and China.

The key takeouts from this year report included (please note, much of the results are from a US perspective):

• Facebook and Google now take 85 per cent of every ad dollar spent online. That’s up from 76 per cent the year previous. 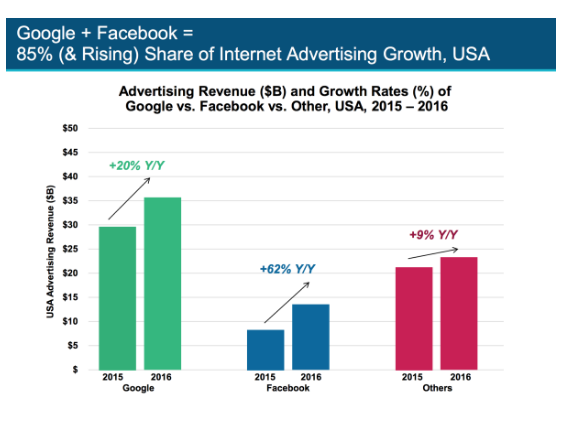 • Mobile ad dollars now exceed desktop. While total online ad spend is growing steadily, mobile has now overtaken the desktop in ad dollars just like it has with usage time.

• Ad spend on internet will soon surpass that of TV and indicates a huge opportunity for mobile products to soak up the shift.

• Food delivery is skyrocketing. Convenient delivery services have grown the per cent of revenue from delivery for some restaurants, while personalised grocery delivery from Instacart save shopped heaps of time.

• Global smartphone growth is slowing. Smartphone shipments grew just three per cent year over year last year, versus 10 per cent the year before.

• Voice is beginning to replace typing in online queries. Twenty per cent of mobile queries were made via voice in 2016, while accuracy is now about 95 percent.

• Wearable devices have continued to gain momentum with a quarter of Americans now owning one (up 12 per cent from 2016). The most popular of these are devices tracking our speed and our heart rate.

• In the US in 2016, 60 per cent of the most highly valued tech companies were founded by first- or second-generation Americans and are responsible for 1.5 million employees. Those companies include tech giants such as Apple, Alphabet, Amazon and Facebook.

• In 10 years, Netflix went from 0 to more than 30 per cent of home entertainment revenue in the US. This is happening while TV viewership continues to decline.

• More Americans are now downloading health apps and willing to share our health data, too.

• This massive new pool of health data means medical knowledge will double every 3.5 years (as opposed to doubling every 50 years like it did in 1950).

• Global interactive gaming is becoming mainstream, with 2.6 billion gamers in 2017 versus 100 million in 1995. Global gaming revenue is estimated to be around $US100 billion in 2016, and China is now the top market for interactive gaming.

• While internet growth is slowing globally, that’s not the case in India, the fastest growing large economy. The number of internet users in India grew more than 28 percent in 2016.