However, the audience reach of magazines is extended to 15 million Australians 14-plus when you include magazine reading online (either via the web or an app).

Unfortunately, the major magazine publishers have all withdrawn from the circulation audit meaning Roy Morgan’s readership results are the independent measure of magazine performance.

As expected, Australia’s best read magazines continue to be food, women’s and automative clubs. According to Roy Morgan, Coles Magazine is the most read magazine in the country with 415,200 readers – a YOY increase of 11 per cent.

Check out the top 15 most read magazines below: 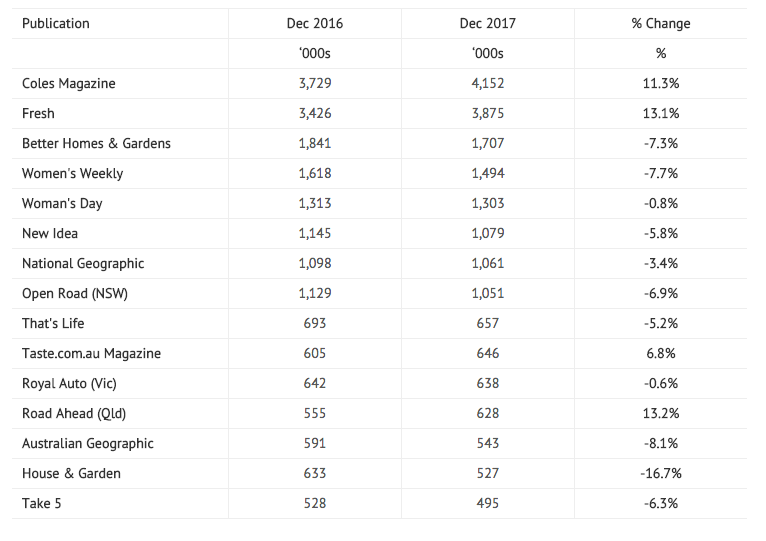 Women’s Fashion magazines have led the way in the 12 months to December 2017 readership results with the largest year-on-year category growth – up an impressive 9.6 per cent – to be the seventh most read category overall at 1,267,000 or 6.3 per cent of the population.

Category leader Frankie was the fastest growing women’s fashion magazine increasing 19.7 per cent to a readership of 407,000 followed by Elle magazine, now read by 171,000 (up 17.1 per cent). Vogue Australia was also a strong performer increasing its readership to 355,000 (up 8.9 per cent).

The five most read categories of magazines:

Food and entertainment is one of Australia’s fastest growing magazine categories and is now read by 6,276,000 Australians, or 31.2 per cent of the population, up 6.7 per cent in the year to December 2017.

Although the readership of mass women’s magazines has decreased in 2017 (down 5.3 per cent from a year ago) a significant 3,356,000 Australians, equal to 16.7 per cent of the population, continue to read these titles.

The fourth most popular category of magazines remains Home & Garden publications, despite a drop of 4.4 per cent in the last 12 months. Almost three million (2,959,000) Australians now read at least one magazine in this category equal to 14.7 per cent of the population.

Readership in this category declined over the past year, down 7.7 per cent to 1,655,000 Australians.

Of Australia’s leading 10 magazines ranked by cross-platform audience seven of the ten retain a significantly larger readership via their print editions than their digital offerings – a clear contrast to their print newspaper cousins, although this picture is slowly changing as more magazine publishers expand and refine their online offerings.

Just under a year ago many of Bauer Media’s magazine brands (including Women’s Weekly, Woman’s Day, Good Health, Mother & Baby, Take 5 and others) consolidated their online presence under category banners such as Now to Love which has a digital audience of 887,000. The results in the cross platform table below reflect this new positioning and therefore year on year comparisons are not made.