British cycling magazine Cycling Weekly has gone into damage control after an image of a female cyclist was mistakenly captioned “token attractive woman”.

The cyclists, Hannah Noel from Hinckley Cycling Race Club, was reportedly furious when the magazine hit stands with the offending caption. 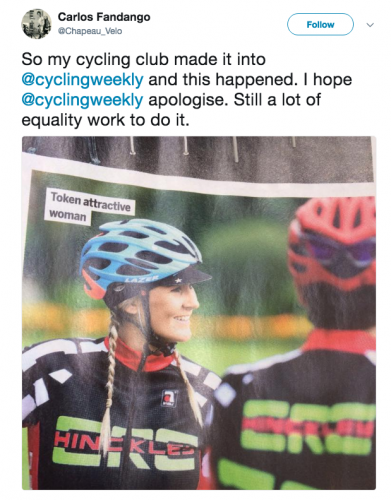 It appears the work of a rogue sub-editor who forgot to double-check his captioning before the magazine went to print.

The magazine’s editor Simon Richardson was soon in damage control, taking to Twitter to offer his apologies. “Unfortunately during the magazine’s production process, a member of the subediting team decided to write an idiotic caption,” Richardson wrote.

“The caption is neither funny nor representative of the way we feel or approach our work. Sadly in the rush to get the magazine finished it was missed by other members of the team and eventually sent to print.

“We would like to apologise unreservedly to the rider in the photograph, the Hinckley CRC and all our readers. This appalling lack of judgment by an individual is just that, and not a reflection of the CW office.”

Noel took to Facebook to register her disgust at the caption: “I made it into Cycling Weekly, it seems not for my ability as a female cyclist but as a ‘token attractive woman’ — I’m absolutely gutted and disappointed in the magazine.”

“It’s not really the reason I’d want to be in a magazine, it’s sexist and derogatory to female cyclists,” Noel penned.

It’s not been reported what happened to the sub-editor behind the unfortunate incident.