The Fashion Spot’s yearly diversity report on high fashion magazines has arrived, and despite an increase of 6.2 per cent from 2015, the percentage of non-white models fronting the world’s top fashion mags sat at only 29 per cent.

The study looked at 679 cover model appearances across 48 top international fashion publications, and covered issues from race to size and age, looking in particular at the likes of Vogue and Harper’s BAZAAR.

This means 482 white models graced the covers of popular fashion glossies in 2016 versus 197 non-white.

There were also a number of magazines that featured white models exclusively (whether on purpose or not is uncertain), and these mags included Vogue Germany, Vogue Netherlands, Vogue Russia, Harper’s Bazaar US, Porter, and LOVE, which for context hasn’t featured a single non-white model in the past three years of its quarterly publication.

Looking at the topic of plus size models, out of the year’s 679 cover model appearances, a sorry six (or 0.9 per cent) belonged to women size 12 and above.

Interestingly, as Fusion writer Marisa Kabas pointed out, Wilson’s cover was less a celebration of her size, with her figure barely visible under sweeping hair and long sleeves. It’s also worth mentioning that Marie Claire U.K. booked no nonwhite cover models in 2016. 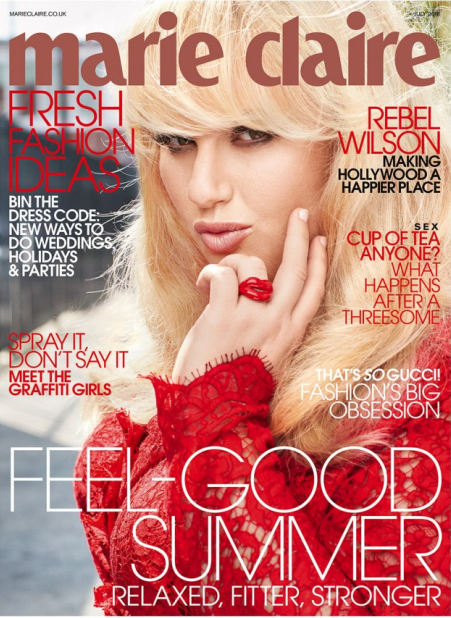 Transgender models were the least represented group, accounting for 0.7 per cent of all cover bookings, and with four of the five total appearances belonging to It model and Transparent star Hari Nef.

And while there’s a long way yet to go, this year saw transgender visibility in the media reach an all-time high, off the back of Caitlyn Jenner’s best-selling cover of Vanity Fair in 2015, with two magazines not included in the report featuring transgender models on the cover.

Marie Claire Spain named transgender model Andreja Pejic its Model of the Year, honouring her transition with a cover in March, and Indie glossy LADYGUNN celebrated Laverne Cox on its Fall/Winter issue.

In the age stakes, women aged 50 and over graced the covers of popular fashion publications 34 times in 2016, accounting for five per cent of all bookings.

Older models of colour were not forgotten, either. Michelle Obama rocked the covers of T Magazine’s The Greats Issue, InStyle’s October edition and Vogue US’s final issue of the year. In addition to Vanity Fair, Viola Davis covered ELLE US February 2016 Women in TV Issue, where she appeared alongside Louis-Dreyfus, Priyanka Chopra, Taraji P. Henson and Olivia Wilde.

It’s worth noting, however, that as with a lot of transgender models on magazine covers, the minority is grouped together with majority faces. For example, older models lumped in with stacks of young faces, and transgender posing with cisgender models.

To round it out, the most in-demand models of the year according to The Fashion Spot included primarily white, young faces, with the ‘Insta-girl’ the new It Girl for 2016.

Gigi Hadid has fronted more covers than any other model, nabbing 14 credits in total over the past 12 months, including no less than eight international Vogue editions. 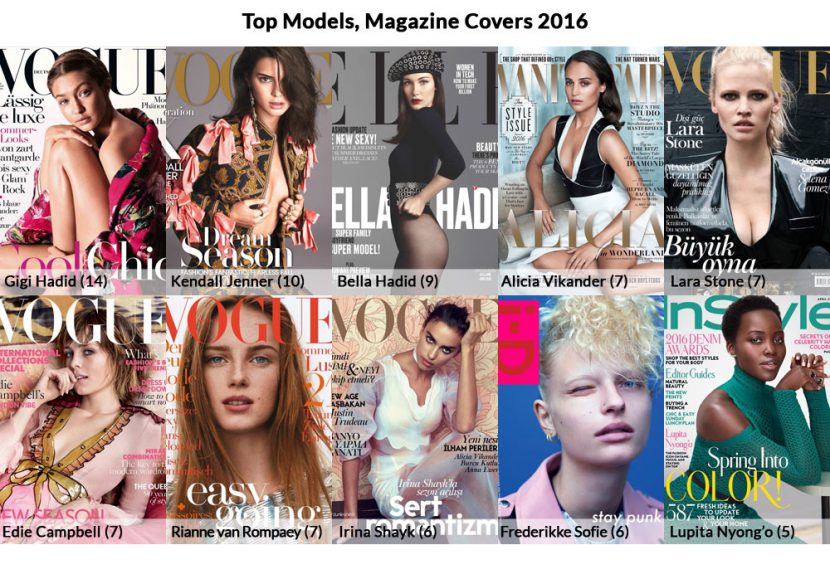