The day after a big one is a physiological nuisance, But today marks the official launch of the Dry July challenge and maybe the beginning of a headache-less month.

Executive director and co-founder of Dry July, Brett Macdonald is urging the public to put down that pint, say no to that glass of vino and sign up as a participant to raise funds for adult cancer – a cause close to Macdonald’s heart.

“After losing close relatives, including my Dad and Aunty to cancer, I discovered a real need for funding in particular areas of cancer services”

It was during the winter of 2007 that Macdonald challenged his circle of social booze hounds to quit the drink and see who could last the longest. Dry July was born.

Seven years on, Macdonald is almost incredulous at the success of Dry July. Yesterday, they held their first public event in Circular Quay, launching the official #DryJuly campaign, “we set a Guinness World Record for the world’s largest smoothie… it was 2,300 litres.” The event attracted 3000 additional participants making it the biggest sign-up day in Dry July history. “We’re hoping to sign up 20,000 people this year and we expect to raise $4.5 million for the Australian campaign.” 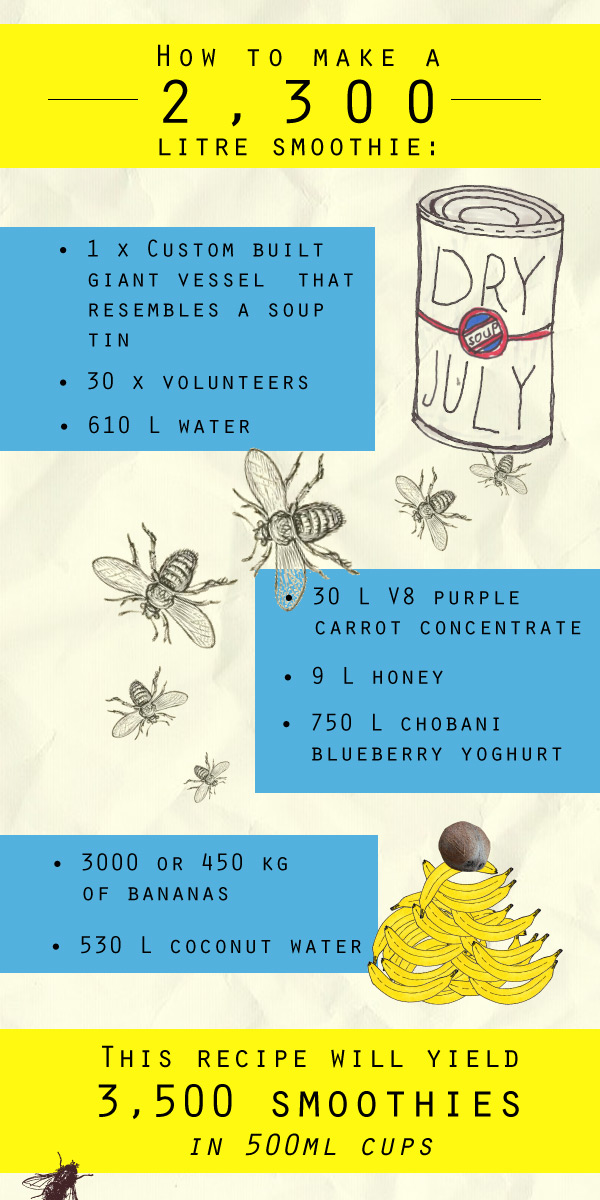 Dry July collaborated with communications companies Clemenger and PHD as well as social media agency We Are Social to execute #DryJulySmoothie.

“Social media has been vital in gaining exposure and expanding our reach” Macdonald explains, “Clemenger were instrumental in managing traffic and getting partners on board on the day.”

When asked to what he attributed the success of #DryJulySmoothie, Macdonald chuckles “the weather helped” before expanding on the campaign’s message,

it’s amazing what you can achieve without a hangover

“We wanted a fresh angle, and I think this message really resonates with people. It works on many levels and encourages participants to consider healthy lifestyle choices while helping to raise funds for 37 different adult cancer charities across Australia at the same time.”

In previous years, alcohol abstinence and fund-raising resulted in the installation of 70 televisions throughout the cancer ward at Royal Melbourne Hospital, new chemotherapy chairs complete with iPads and WiFi connectivity. “We want to fund tangible change ranging from accommodation centres to transport vehicles… we can help to offer patients respite from their treatment,” Macdonald explains.

Having only come to life about six weeks ago, #DryJulySmoothie overcame the expected roadblocks to interactively engage the passers-by at Circular Quay. Macdonald is adamant this was the vehicle that drove the organisation to record-breaking sign-ups, “the awareness we were able to raise, the information we distributed about getting involved, being  face-to-face and handing out flyers  worked really well. We connected.”

Oh, and in case you were wondering, the previous record held for the largest smoothie was 1,514.16 litres prepared by Cabot Creamery Cooperative at Bike Expo NYC in New York, New York, USA, on 3 May 2013.

This July, ditch the drink, suck back a smoothie and raise a few bucks for a worthwhile cause, you can sign up here.