The Aussie version of independent publication The Huffington Post launched this morning, a day ahead of the scheduled August 19.

The publication at www.huffingtonpost.com.au opened with an exclusive from Minister of Foreign Affairs Julie Bishop and her stance on same-sex marriage. 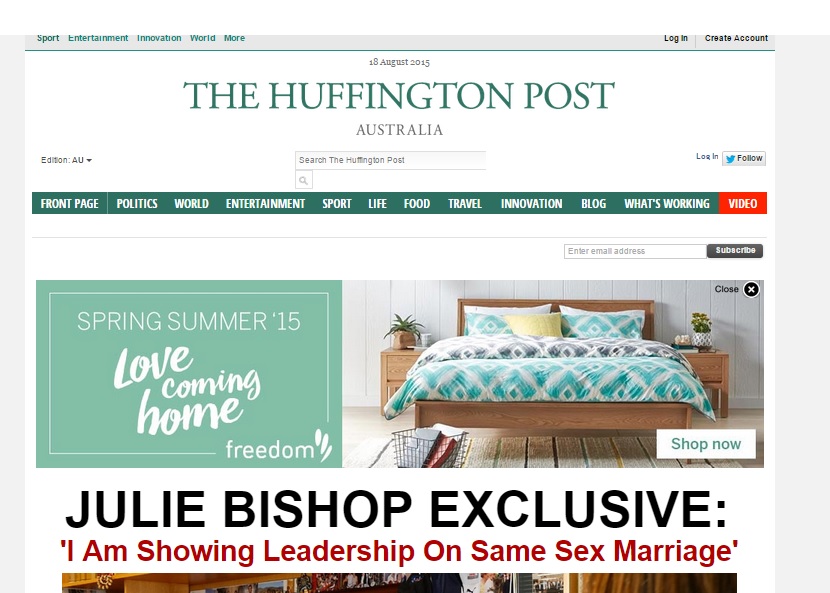 The interview is available in both text and video, solidifying the HuffPost’s stance that in a few years it wants to be at least 50 per cent video.

Founder of The Huffington Post, Arianna Huffington, welcomed the Down Under version – the 15th version all up – in a blog post on the site.

“HuffPost Australia will be dedicated to producing great original reporting about the critical issues that Australians face, and to telling stories that focus on helping Australians live more fulfilling lives, while opening up our blogging platform to voices from all across the country to start a conversation on the topics that matter to Australians most,” she wrote, adding the numerous topics the publication will cover.

Huffington heralded Fairfax Media – who was the launch partner for the Aussie version – thanking the CEO Greg Hywood and the team.

Running the team Down Under is Chris Janz as CEO with former News Corp journo Tory Maguire as editor-in-chief.

The impending launch has had many nattering about how it will affect the market, with an article posted on The Conversation this morning questioning whether Aussies will care the HuffPost has come to Australia.

Penned by Axel Bruns, a professor at the Queensland University of Technology, he notes data from data and analytics company Hitwise shows a decline in Aussie audiences across the HuffPost sites.

“It will be interesting to see whether the launch of an Australian edition of the Huffington Post can arrest or even reverse this decline,” he writes.

“The performance of other recent entrants into the Australian online news and commentary market has clearly shown that such sites can establish themselves as viable and even leading players in the media landscape. However, the greatest successes have been reserved for comparatively populist and tabloid outlets like Daily Mail Australia and Buzzfeed Australia.”