The devastated expression on B&T’s editor’s face this morning says it all – it’s not a happy situation for our Aussie cricket team in The Ashes.

The match had 848,000 tuning in to see what was going to happen on Day One of the Fourth Test of England vs Australia, according to OzTam preliminary ratings. Melbournians had the most tears streaming down their faces as 305,000 people from the Victorian capital had their eyes glued to the TV. There were 193,000 from Sydney crying.

However those who probably weren’t shedding a tear were the folks over at Nine where the coverage of The Ashes on GEM helped the network smash results for the night. Nine had a daily share of 36.1 per cent. The next closest network was Seven with 24 per cent.

The disappointing results also unearthed some distraught photos, leading the Herald Sun to pre-warn those viewing that some may find the graphic images disturbing. 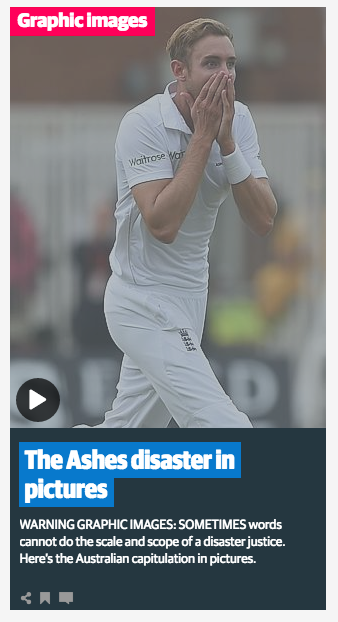 As it always does, social media lit up with reactions to the disastrous Ashes score. Here are some of B&T’s favourites.

Sat with a coffee chatting about the amazing action at #ashes2015 #bbccricket Even my coffee was astonished! pic.twitter.com/9uirXYiVTT

For all you masochists out there: Australia’s wickets from 4th #Ashes2015 at #TrentBridge in 6 seconds. #Cricket http://t.co/wwYxKmelZm

The first test innings in history where the ball by ball summary fits in a tweet #Ashes2015 — Antony Green (@AntonyGreenABC) August 6, 2015

A quite incredible day of Test cricket… http://t.co/ATo0Uc9mgC #Ashes2015 pic.twitter.com/UgHj8pYcwK

So an Englishman by the pool just told @Jim_Wilson7 about #Ashes2015 … This calls for a special delivery… pic.twitter.com/gfubAJtfqr — Chris Bath (@ChrisBathTV) August 6, 2015

#bbccricket #Ashes2015 Even the Kiwis have a smug smile pic.twitter.com/3klh5DGk4R

All the Aussie batsmen this afternoon.. #Ashes2015 #Fear pic.twitter.com/GkccSOXhV5

That awkward moment when ‘Extras’ contribute more to the score than any of your batsmen! #Ashes2015

Can’t tell if this is a cricket match or a Game of Thrones episode. #Ashes2015

Karl Stefanovic, presenter of Nine’s morning show The Today Show, also went nude this morning during due to a lost bet about The Ashes score.

If clarkey doesn’t get a hundred I’m gear off on the show tomorrow. Woohoo. Positives for everyone. What — Karl Stefanovic (@karlstefanovic) August 6, 2015

Nine boss David Gyngell just rang and said he’s rung @TurnbullMalcolm and we are good to go. I’m off for a run.

Just so you know I’m not joking. This text from Gynge. pic.twitter.com/FllXiUEriJ — Karl Stefanovic (@karlstefanovic) August 6, 2015