Advertise with us
Posted 5 December, 2019


New Zealand newspaper The Otago Daily Times is in damage control after it published a cartoon that apparently mocked the recent deaths of 60 Samoans.

Currently, the island nation of Samoa is in lockdown after a measles outbreak affected 4000 people, killing 60 of them, many young children.

A cartoon published in The Otago Daily Times on Monday showed two women existing a travel agency, with an accompanying caption that read: “I asked ‘What are the least popular spots at the moment?’, she said: ‘The ones people are picking up in Samoa.'”

The cartoon, by artist Garrick Tremain, was quickly condemned as “heartless”, “appalling” and “distasteful”. 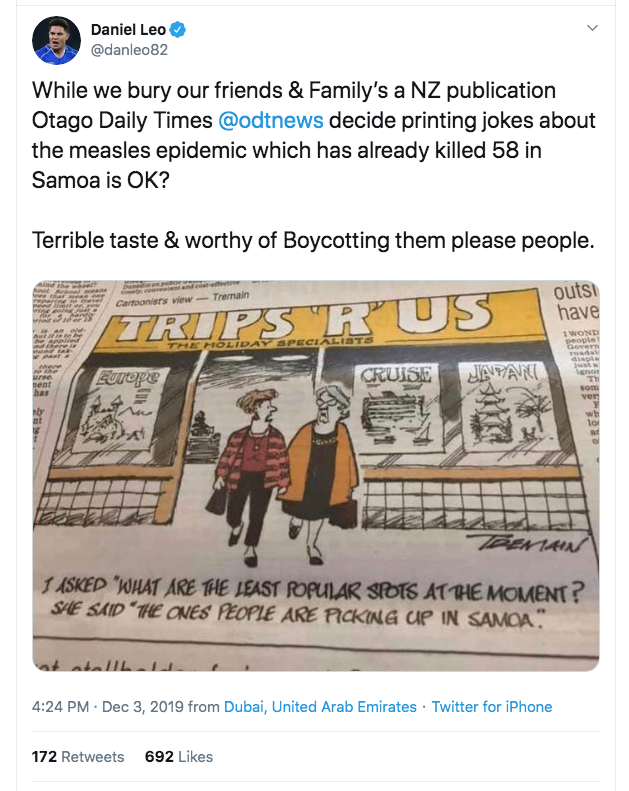 Leo tweeting: “While we bury our friends and [family], a NZ publication Otago Daily Times decide printing jokes about the measles epidemic which has already killed 58 in Samoa is OK?”

Foon said: “I am very embarrassed that this cartoon originated in New Zealand. It is severely out of touch with the international community who are standing in solidarity by providing help with the medical effort in Samoa.

“And while people all over the world express their sympathy and concern for the rising death toll, this cartoon only seems to be interested in a divisive and cheap laugh.”