Advertise with us
Posted 5 November, 2019


Facebook has unveiled its first-ever corporate logo in an effort to separate the corporate entity from the app.

Making the announcement, Facebook CMO Antonio Lucio, who started working with the tech giant in mid-2018, said the colour and typography used for the new logo is to “create visual distinction” between the company and its various subsidiaries.

“Today, we’re updating our company branding to be clearer about the products that come from Facebook,” Lucio said in a blog post.

“We’re introducing a new company logo and further distinguishing the Facebook company from the Facebook app, which will keep its own branding.”

Having acquired the likes of Instagram and WhatsApp in the past few years, while also extending its offering into entities like Messenger, Workplace and cryptocurrency Calibra, branding is now a priority for Facebook.

The company recently started using “from Facebook” within all of its apps. Lucio said this branding would soon be updated with the new logo. 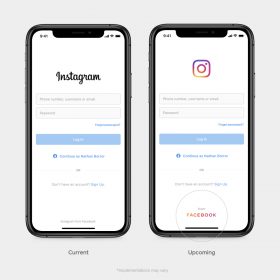 “This brand change is a way to better communicate our ownership structure to the people and businesses who use our services to connect, share, build community and grow their audiences,” he said.

Lucio, who joined Facebook after spending time with HP Inc, Visa, PepsiCo and Kraft, said the corporate logo had been in the works since he started with the company.

He actually alluded to the change while speaking at Advertising Week APAC in Sydney earlier this year, telling the audience, “we need to create that corporate persona that owns the responsibility part of the narrative, which is improving across election interference, fake news, data management and privacy”.