In collaboration with Queensland Treasury, Engine has developed a multi-faceted campaign to raise awareness about the need for a National Injury Insurance Scheme in Queensland.

The campaign was brought to life by cutting vehicles in half to demonstrate that Queensland’s road users are not half as protected as they think, highlighting the fact that 50 per cent of people who sustain catastrophic injuries are not covered by CTP insurance.

Launched on February 25 outside Queensland’s Parliament House by Treasurer Curtis Pitt, the campaign activity runs across press, radio, digital and social, and includes activations in the Brisbane CBD.

Engine managing director Tim Weger said, “The team at Treasury were an absolute delight to work with and completely aligned in wanting to deliver standout creative to turn heads and truly educate motorists on their current level of cover”. 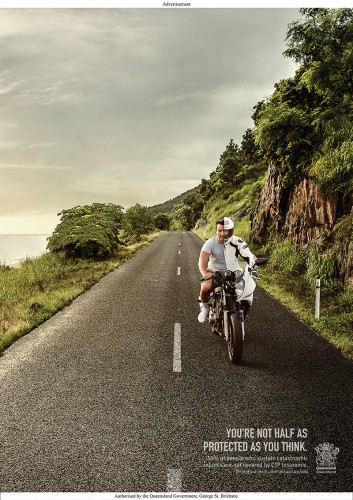 Engine creative director Kory McAvoy added, “We needed to take messaging that was incredibly layered and confusing and make it as clear as day for absolutely everyone to understand. Hence, our half protected motor vehicles were born.

“Our production partners were super collaborative and always open to explore different ways of doing things, which was really fun for us.”