Advertise with us
Posted 6 February, 2018


It may be an early contender for worst marketing stunt of the year, but corn chip manufacturer, Doritos, is apparently set to release a new range of its salty treats tailored specifically to women.

According to media reports, the new lady snack will be smaller in size, come with less of a crunch, have less salt flavour, while the packets will be discreet enough to fit into a woman’s handbag.

Apparently, the move is based on the idea that Doritos’ current model is very masculine – big bags of crips and plenty of post-munching finger sucking.

The global chief executive of PepsiCo – makers of Doritos – Indra Nooyi told a US radio station that women would love to stuff their gobs like the fellas “but they don’t. They don’t like to crunch too loudly in public. And they don’t lick their fingers generously and they don’t like to pour the little broken pieces and the flavour into their mouth.

“It’s not a male and female as much as ‘are there snacks for women that can be designed and packaged differently?’ And yes, we are looking at it, and we’re getting ready to launch a bunch of them soon,” Nooyi said.

However, the plan for a lady crisp is already being lampooned with suggestions it merely plays to gender stereotypes that women want a petite size while men want large. While others suggesting they have no problems with Doritos’ current offering.

A spokesperson from the Women’s Equality Party said: “Companies that perpetuate these tired gender stereotypes will continue to lose out on the single biggest consumer group: women.”

Check out some of the social media furore below: 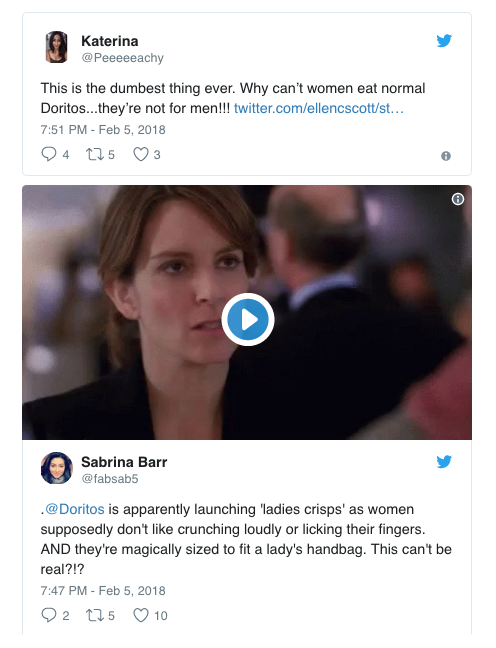 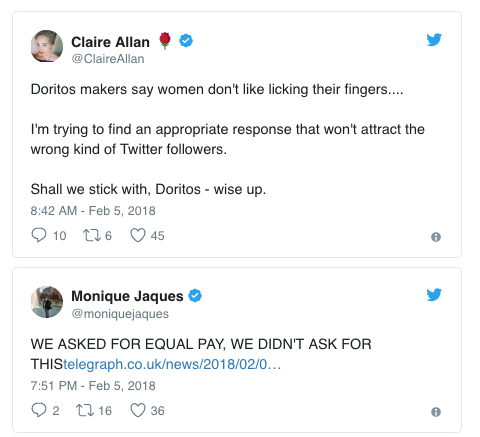 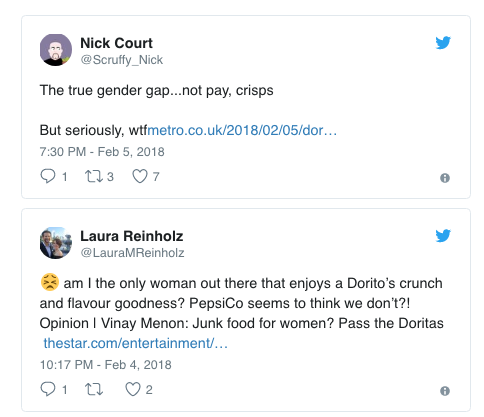