Admittedly, few of us watch the dating show Love Island for its scintillating prose or rigorous political debate.

So, a new trailer for the UK series that’s currently airing should come as little surprise.

The trailer shows the cerebral exploits of three of the bikini-clad contestants – Joanna, Jourdan and Belle.

Belle gets the conversation off to a flyer by admitting she was unaware that Edinburgh was in Scotland.

To which Joanna responds: “Is it? Seriously?”

Things then go from bad to worse. Jourdan then asks: “I didn’t know, oh my god, is Italy in Rome? Or is Rome Italy?”

Thankfully, Jordan then clears things up: “Rome is in Italy. Rome is the capital of Italy.”

However, Belle is having none of it: “Is Barcelona in Rome?” she enquires.

To which Jordan clarifies: “Barcelona is in Italy” before Belle adds: “I thought it was Spanish.”

The clip was soon picked up by UK TV presenter Piers Morgan who tweeted, “Even watching this has damaged my brain.” 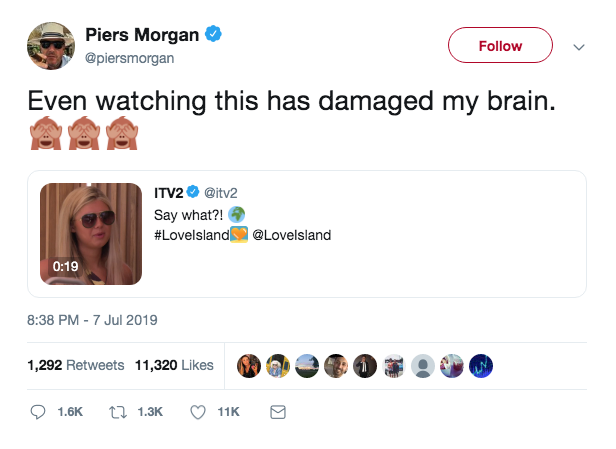 And, as these things do, the clip soon went viral via social media.

However, we’re not really in any position to sling mud at the UK if a recent trailer for 10’s upcoming series of The Bachelor is anything to go by.

The clip shows this year’s bachie Matt who is, in fact, an astrophysicist by trade, a fact that seems a little lost on potential suitor Abby. As you’ll discover in the clanger below: