The Daily Telegraph has drawn the ire of many Aussies around the country after publishing an infographic suggesting that same-sex attraction among teenagers is unhealthy.

The infographic (see below) was part of a story on the “health crisis” that young Aussies are facing in yesterday’s print edition of The Tele.

It highlighted a statistic that “16.8 per cent of secondary school students in Australia are attracted to the same sex as them or to both sexes” amongst a string of other stats such as alcohol intake, drug use and psychological distress. 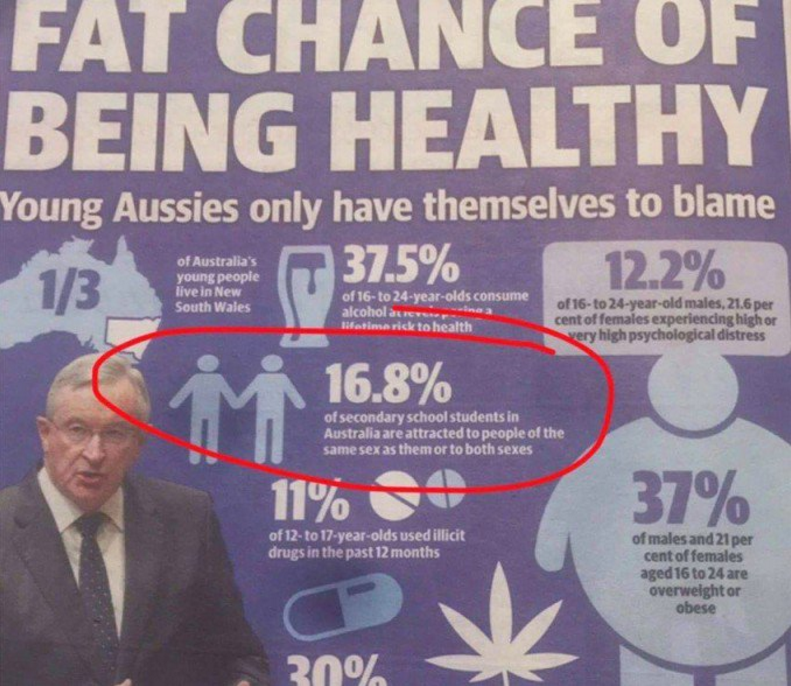 And, as you would expect, the infographic was soon all over the Twittersphere, with users labelling it “disgusting”, “bullying” and “blatant homophobia”.

Radio host Em Rusciano was another Aussie who lambasted The Tele over its controversial infographic.

According to the @dailytelegraph,being a LGBTQI teen is bad for your health. Akin to smoking/excess drinking. I CAN’T. What is this fuckery? pic.twitter.com/65kv9BIzZD

The public outcry forced the News Corp masthead to issue not an apology, but an explanation clarifying the context of the graphic.

This is the statement from the @dailytelegraph ‘s editor on today’s graphic #auspol pic.twitter.com/hyb4WwH4gg