TV viewers in southern California got quite the shock over the weekend after doomsday messages suggesting the world was about to end starting appearing on their TV screens.

According to reports on The Orange Country Register, regular viewing of the cable channel HGTV was disrupted by a sinister man’s voice booming: “Realise this, extremely violent times will come” and that world would end on September 23. 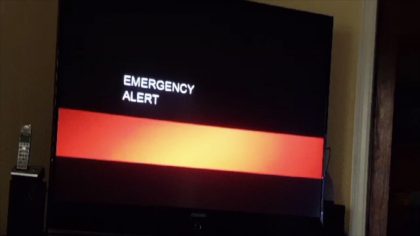 “It almost sounded like Hitler talking,” said Orange County resident, Stacy Laflamme, who had the doomsday message flashed across her TV screen. “It sounded like a radio broadcast coming through the television.”

Another woman to receive it was local resident, Erin Mireles, who said: “I was definitely startled, ’cause the volume increased exponentially,” she said. “I wasn’t alarmed in the sense of thinking something was wrong, ’cause I assumed it was some sort of hack. My channel changed back to Bravo after a couple minutes.”

KWVE-FM has since apologised for suggesting humankind was about to an end, issuing the following statement: “During a regularly scheduled test of the Emergency Alert System for Orange County, KWVE-FM experienced an equipment failure that resulted in KWVE-FM not sending the end-of-message tones that would disconnect those media entities participating in the Emergency Alert System test.”