In this comprehensive opinion piece, Review Partners’ CEO Paul Costantoura dives deep into the sticky subject of Australia Day advertising, rounding up all the ads from 2017 and handing down some insights.

The ad dominated the blogosphere in the weeks leading up to Australia Day and has received almost than 1.3m views on YouTube alone.

However, in the days surrounding Australia, commercial advertisers were being challenged by the Change the Date campaign.

Two videos went viral.  The first one was the angry parody on the old video piracy campaigns – but it only received just of 100k views.

On the other hand, comedian Jordan Raskopoulos’ video making the case for Australia Day to be changed to May 8, blew away all other contenders with almost seven millions views on Facebook.

More on that debate later, but what have other advertisers been doing to take advantage of our national day?

To find the answer we asked our friends at advertising monitoring firm www.ebiquity.com.au and they generously offered to scan their database across all media during January.

It turns out that there were more than 150 ads created to take advantage of our national day.

But only about 10 of them made any real attempt to creatively capture the essence of what it means to be Australian.

Not many, but how do they compare with the lamb ad?  And what do they tell us about the richness of Australian identify on the 229th anniversary of the arrival of the First Fleet?

Let’s remember that the lamb ad was based on a strong, clear idea about our national identity.  I haven’t seen the brief, but my interpretation of the central message would be:

Of course we are a diverse nation, but more than that we are an inclusive nation which respects the special place of the first Australians and welcomes every new wave of migrants to join us at our most iconic event, the beach BBQ (regardless of race, religion, colour, gender preference, etc).

Hard to argue with, but it has drawn a lot of criticism, most which has ignored that central message.

Instead the opposition has focussed on the negative significance of January 26 and the tragic reality of Indigenous oppression.  It has cast an angry shadow over the concept of celebrating our national identity until we purge ourselves of the memory of the First Fleet.

So what do Australian advertisers think is worth celebrating about our culture?

In a nutshell, commercial advertisers believe we like listening to classic Australian rock at an outdoor BBQ (or a gastro-pub near the water), enjoying our discount beer and wine from our sponsored cooler bag while watching the cricket or placing a bet on lotto or the dogs, and sending each other up with bad jokes while renovating the house.

On the other hand, the Australian Government believes we like listening to country music at a picnic with friends from around the world, enjoying our Asian fusion pizza while welcoming new Australians and reflecting on how lucky we are to live here.

First, there are only five commercial TV ads which tried to capitalise on the day.

Compared to the lamb ad, most of them are uni-dimensional and play to traditional stereotypes.

Coles supports the lamb industry with an inside joke for those who recognise cricketer Merv Hughes.

VB advertising features fans dressed as bananas for an Adelaide Oval cricket match on the day.

Aldi wins for creativity with its talking mushroom feeling smug and pointing out that the sausages are not very happy about their fate on Australia Day.

If you don’t have a BBQ, then Bunnings will sell you one, or you can get a famous Bunnings sausage sandwich from the charity barbie while you are there.

Lottoland has timed their $500m draw at 3pm on the day, just as the BBQ is dying down and the ice is melting.

In print and outdoor, XXXX sums up nicely the rugged, outdoor, gender neutral, casual mateship that is synonymous with Queensland’s finest.

Meanwhile, the best Australia Day offer in the country comes from the NT news, where you can get a free meat tray just by cutting the coupon and taking it to your local butcher (hard to tell if that is a lamb chop)

Or in classic NT tradition, you can enjoy any number of ‘sports’ at Australia’s biggest sports carnival.  Of course this includes the sports of darts, 8-ball and the classic Holden Ute run.

Meanwhile Melbourne advertisers have made the most of radio advertising.

Sandown Dogs challenges listeners with the question ‘What could be more Aussie than that?’ as they promote their Australia Day-eve night-time greyhound races featuring Aussie Rock legend Angry Anderson.

And the famous Riva on the bay at St Kilda invites you to enjoy the ‘Kings of Aussie Rock’ with Jimmy Barnes, Jon Stevens and Darryl Braithwaite.

Of course, it wouldn’t be Australia Day without a full Esky, so most of the other commercial ads that Ebiquity discovered were for discount beer, wine, spirits and alcopops from several major liquor retailing brands.

So where is the courage and imagination of Australian advertisers to challenge the lamb industry and really put a meaningful spin on what it means to be Australian?

It would be tragic if they have been scared off by the haters and trolls and left us to a sanitised stereotypical view of ourselves that hasn’t changed for 50 years.

Or does it simply remind us that we don’t really have a clear national identity that can be reflected with pride in advertising?

On the other hand, government advertising for Australia Day centres around the ideas found at www.australiaday.org.au, the site of the National Australia Day Council (NADC).

There is no doubt that NADC has helped transform Australia Day from a day ignored by most into a wealth of events and celebrations in every city and town across Australia. According to its 2015-16 annual report, it delivered $4.5m worth of campaign media placement value (pro-bono).

The mission of NADC is to ‘… inspire national pride and spirit through a range of Australia Day programs and the Australian of the Year awards.’

An ambitious mission – and one that raises the question: ‘What is our national pride and spirit?’

The current advertising campaign centres the idea ‘Celebrate Australia Day Your Way’ and features five key people who tell us what they will be doing on Australia Day.

I can only imagine how tough it must be to choose five people to represent our national pride and spirit.

Three of them are white, middle-aged anglo-Saxons.

Lee Kernaghan, singer, will be at Tamworth with country music mates.  Rosie Batty, domestic violence campaigner, will be with friends reflecting on how lucky we are.  Ben Roberts-Smith, decorated army veteran, will be at a citizenship ceremony.

Malaysian born celebrity chef Poh Ling Yeow (Australia’s answer to Nigella Lawson), will be firing up the pizza oven (not the wok).

Alphonse Mulumba, refugee from the Congo and former ALP candidate in Tasmania, will share a picnic with friends from around the world. 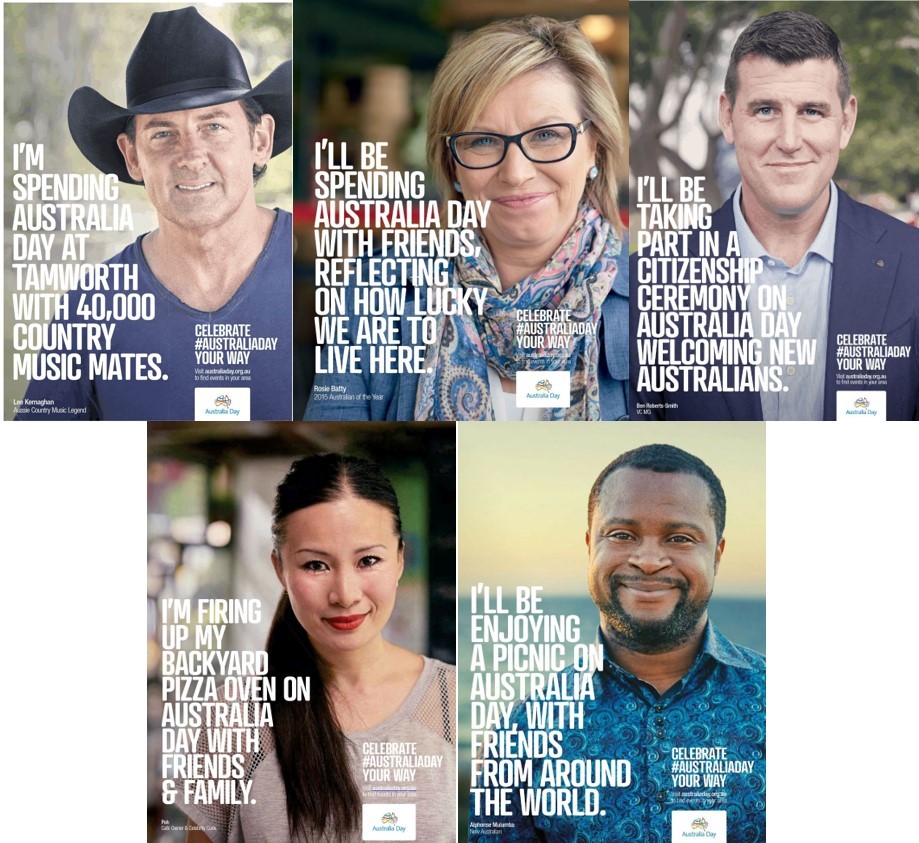 All of them are individuals who have achieved a lot in their own areas and say something about Australia today.

I guess just about everyone else – since you have to wonder why three of the spots went to Anglo Saxons when we pride ourselves on having one of the most diverse cultures on earth.

(It’s also an interesting choice to cast the client in the campaign since Ben Roberts-Smith is also the Chairman of the Board of NADC).

But at a time when questions are being raised about the date of our national day, the obvious omission is the lack of an Indigenous person.

Whatever the reason, this raises questions about the appropriate response to the growing movement of angry people who are demanding that we ignore Australia Day on January 26th because it was ‘invasion day’ rather than ‘Australia Day’ – signifying the oppression of Indigenous people by the British invaders.

This has even led to a campaign against Triple J’s hottest 100 being featured on Australia Day.

It has spawned a reactionary element on social media, including a strangely aggressive (but well-produced) music video featuring some anti-Australia Day rappers with serious attitude.

However, this doesn’t mean all people of Aboriginal or Torres Strait Islander origin turn their backs on Australia Day.

You can find a lot of Indigenous people volunteering as Australia Day ambassadors and willing to embrace the idea of celebrating and sharing their own culture with the rest of us on January 26.  (In addition to Cathy Freeman and Wendell Sailor who appeared in the lamb ad).

And on January 26 every year since 2001, Sydney has hosted ‘the largest one day celebration of Aboriginal and Torres Strait Islander cultures in Australia’ – the Yabun Festival since 2001.

It surprises me that the Government’s own campaign has apparently escaped scrutiny for their choice of spokespeople while MLA copped criticism for their ad which respectfully acknowledges the first people status of Indigenous Australians and also makes the clear point that we all have just as much right to be proud of our Australianness as everyone else.

I think the two words for Australia Day 2018 should be ‘shared pride’ and the challenge for advertisers and agencies will be to step up to really lay claim to their own interpretation of what it means to be Australian.