How the iPhone went when first released, in terms of sales and uptake, could be a good indication as to how the newly released Apple Watch will do.

According to research behemoth Roy Morgan, the Apple Watch is currently performing at a remarkably similar pace to the smartphone adoption around 2008.

In the lead up to the much anticipated launch of Apple Watch, Roy Morgan said around 2.7 per cent of Aussies were intending to buy one of these new wrist devices in the next year. While that’s not a lot at the moment, said Roy Morgan, it’s similar to when the iPhone first came out, where it was only 3.6 per cent saying they might buy one. Look where the iPhone is now.

“Prior to the first iPhone release, only around one in 100 Australians owned a BlackBerry,” said Tim Martin, general manager of media at Roy Morgan Research.

“Ahead of the Apple Watch release in April this year, a similar proportion of us had already got ourselves a smartwatch. With such similarities between the two items’ early intention rates and demographics of intenders, it looks like Apple could again be opening up a whole new market with its smartwatch—despite not being the first brand to hit shelves.”

The graph below from Roy Morgan demonstrates similarities between the iPhone and smartwatch adopters, including the age brackets of those intending to buy one. 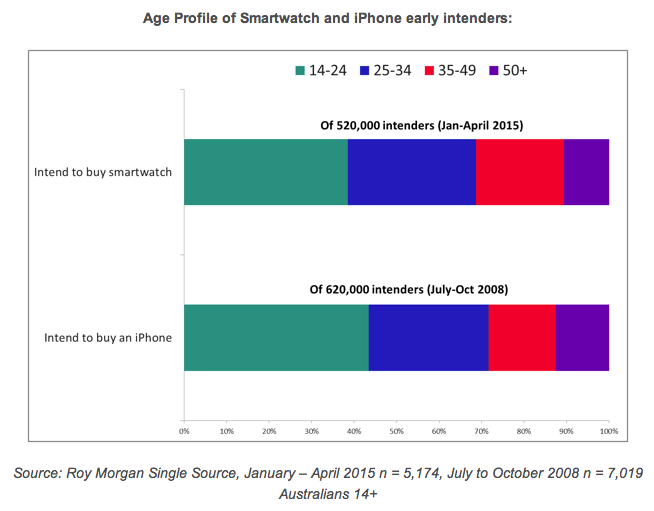