As reported on B&T yesterday, Amazon launched its first Amazon Go store in Seattle yesterday heralding what many are calling a revolution in bricks and mortar retailing.

However, its debut wasn’t without a few hiccups with snaking queues, reported attempts to evade the in-store technology and even threats of an Amazon boycott.

The convenience store, which sells a limited range of Amazon-branded drinks, snacks and ready-made meals, allows Amazon app users to simply walk into the store, take what they want and have the whole lot charged to their credit card without any need to go via a checkout.

However, at yesterday’s debut there were reports of people entering the store without the necessary app on their phone (there’s turnstiles to prevent this), while other reports said customers were seen running from the store in an attempt to evade the cameras and the technology that debits your Visa card. 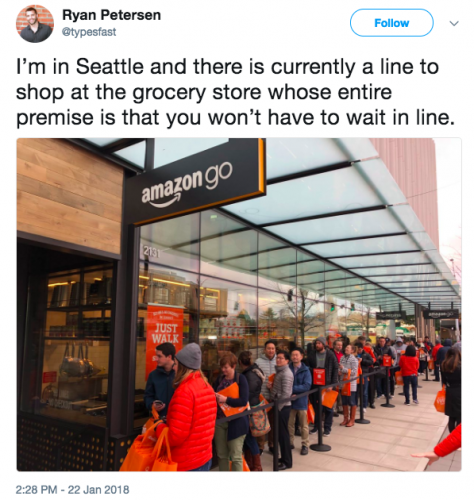 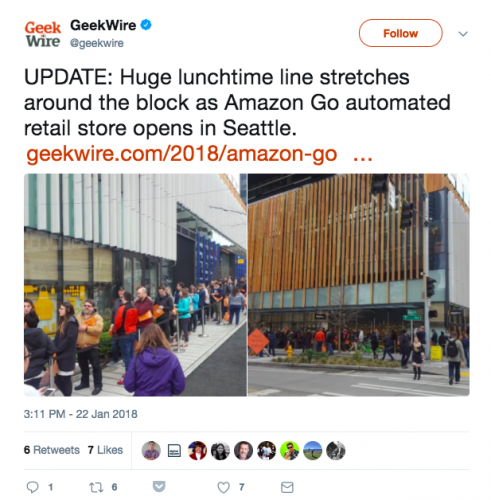 The company also promised its Go store would make the shopping experience queue-free, however, social media posts from yesterday’s first day showed lines of people snaking around the corner to get in. Although, to be fair, there was a lot of novelty around the stores’ opening and there are also fire restrictions regarding the number of people allowed in at any one time.

Meanwhile, anger is brewing at the tech retail behemoth for replacing humans with machines. Retail is the second biggest employer of Americans and many see Amazon’s move as the beginning of the end for low-skilled workers already struggling on the minimum wage.

People have taken to social media to register their unhappiness with the brave new human-free world: 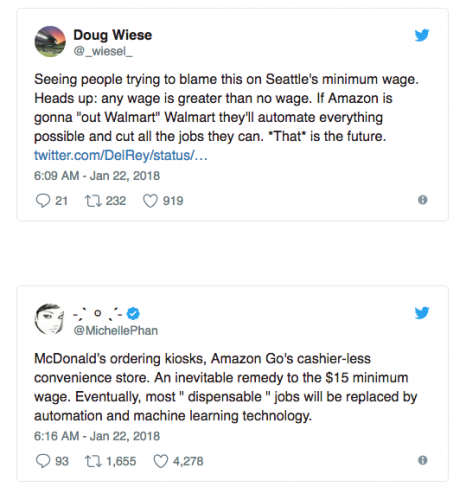 Amazon argue its Go stores will still employ people to re-stock shelves, while it will be prohibited from selling alcohol via its cashier-free system.

While it’s a double-edged sword for retail workers – the more they push for a wage rise the more likely they are to be replaced by a machine.

While others argue it’s merely symptomatic of the times as low-skilled and low-paid jobs are increasingly replaced by automation and tech.