The ABC has been accused of being anti-Jewish after the public broadcaster aired a map of the Middle East during a TV bulletin last Thursday that didn’t show Israel.

The incident has infuriated Jewish leaders, however, the ABC has said the map only showed Middle Eastern nations which had laws that allowed rapists to marry their victims and, as it wasn’t relevant to Israel the country was not shown. Check out the offending map below: 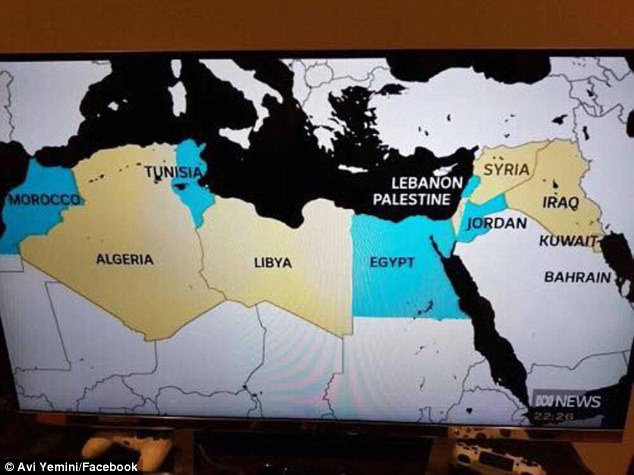 “Our understanding is that this law does not exist in Israel, and never has, so it was not shown on the map,” the spokesperson said.

However, the Israel-free map infuriated Australian Jewish leader and activist Avi Yemini who took to Facebook and said: “Last night ABC wiped Israel off their map. They’re literally doing the Islamists dirty work for them.”

Yemini later told The Daily Mail that the map was the ABC’s attempt to “appeal to the Jew-hating crowd”.

He added: “The time has come for the ABC to stop its constant attacks on one of our closest allies and the only real democracy in the Middle East, Israel.

“This is yet another great example of why we should defund the ABC immediately,” he said.

Over the weekend, The Oz picked up comments by “prominent Australian Muslim” Haset Sali who had publicly backed Pauline Hanson’s calls to ban the burqa in Australia.

According to the report, Sali told ABC radio last Friday that, “I don’t often applaud Pauline Hanson — whether it’s a stunt or an initiative to highlight something that’s unnecessary baggage that has been dumped in with Islam — (but) it’s about time the myth of the burka being Islamic dress was blown out of the water

“The sooner Muslim women get rid of this hideous garb the better,” he said.

The Oz noted that the ABC had extensively covered Pauline Hanson’s comments and recent burqa stunt in the senate, yet had left Mr Sali’s comments largely ignored.

Sali himself told The Oz that it was strange his comments did not make it to other ABC news sites.

“Apparently it was not accepted for online publication,” he said. “I am not going to speculate as to why it didn’t go online as I wasn’t there when the decision was made.

“Nothing surprises me. Unfortunately there is an element of people in the media who don’t want to hear the good news about Islam. They just want to bury it.”