Revealing the headline-making Australians who have captured our hearts and imaginations this year, WHO last night launched its Australia’s Most Intriguing People issue with an intimate and exclusive event, held in partnership with Alpha Keri, at the luxe Ananas Bar at The Rocks in Sydney.

WHO editor Shane Sutton said: “In my first year as editor, I am so proud to reinstate Australia’s Most Intriguing People as part of WHO’s popular roster of signature special issues. Many months in the making and created in collaboration with some of the most notable names in Australia, it brings together the worlds of news, celebrity and popular culture as only WHO can.” 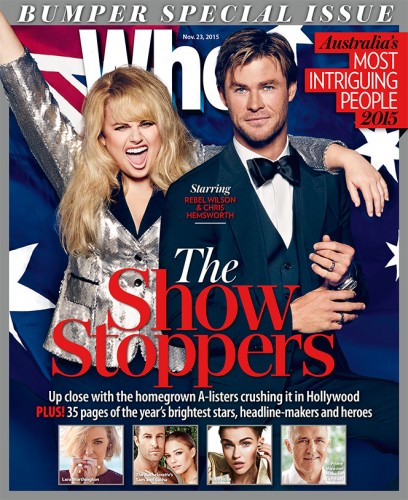 WHO’s gallery of Australia’s Most Intriguing People finds new life in a full-access collector’s issue that brings together Rebel Wilson and Chris Hemsworth for an LA cover shoot celebrating their Australian heritage and sense of good old Aussie fun.

With 35 pages of interviews and photo shoots, the issue salutes the headline-makers and everyday heroes, from showbiz leading lights, sporting achievers, a new generation of spirited up-and-comers to our very own prime minister, Malcolm Turnbull. Sitting with wife Lucy for a rare joint interview, the prime minister puts aside politics to discuss his courtship of the love of his life, his cooking skills, life as a grandparent and whether he has spoken to predecessor Tony Abbott in the weeks since his extraordinary push for power.

Others in WHO’s Most Intriguing People list include Sam Frost and Sasha Mielczarek, Michelle Bridges and Steve “Commando” Willis, Mick Fanning, Alex McKinnon and Teigan Power, and many more.

WHO’s Australia’s Most Intriguing People 2015 issue is on sale today.