It’s not often a media publication has a pot of money sitting idly in the corner, waiting to be spent on marketing. But that’s exactly the case at The Guardian Australia office.

So how much will they invest in above the line marketing for the launch of the new website? Managing director of The Guardian Australia, Ian McClelland, says minimal. It’s the same route they’ve been taking since launching Down Under about 18 months ago.

“We’ve got this pot of money ready for our brand campaign and we’ve just had such unprecedented and exponential growth over the last 18 months,” says McClelland.

“Every month I talk to the senior management team and say ‘should we spend any money on marketing?’ It’s been the amazing journalism and great articles that have driven growth. Good SEO and good social integration too, but it’s really about really powerful journalism.

“Beyond that I don’t think we’ve really spent much money on above the line marketing. We can reinvest that money in more journalists and more into resources. As everyone else is getting rid of them, it’s good that we can do that.”

While the marketing budget side remains silent, The Guardian’s team has been working non-stop to get the new site up to scratch as well as securing Hyundai as a commercial launch partner to show off the new ad formats.

The new site has been in beta testing mode for the past 10 months with 5% of The Guardian’s audience able to view the test site and provide feedback. More than 40,000 pieces of feedback were received during the phase, and eventuated into one area of thinking behind the new site, the death of the homepage as we know it.

Director of digital strategy for The Guardian, Wolfgang Blau, says: “The whole idea of a homepage is broken really if you look at what’s out there.” Referencing news sites around the world, he says typically the publications use a form of ‘zoning’ where the layout is similar to a newspaper, for example business, finance, culture then sport.

“It’s basically reflecting the internal organisation of a news room but not how you would consume,” he says.

As most of the site’s audience come to articles through channels such as social media, other websites or image galleries, Blau said they needed to start thinking about how every page could operate like a homepage.

“We didn’t want to spend too much time thinking about homepages, but much more about how every article can be like a homepage. So much work goes into homepages and you could argue it’s a complete waste because they’re not being saved or stored.”

The old webpage looked like a newspaper with vertical columns. 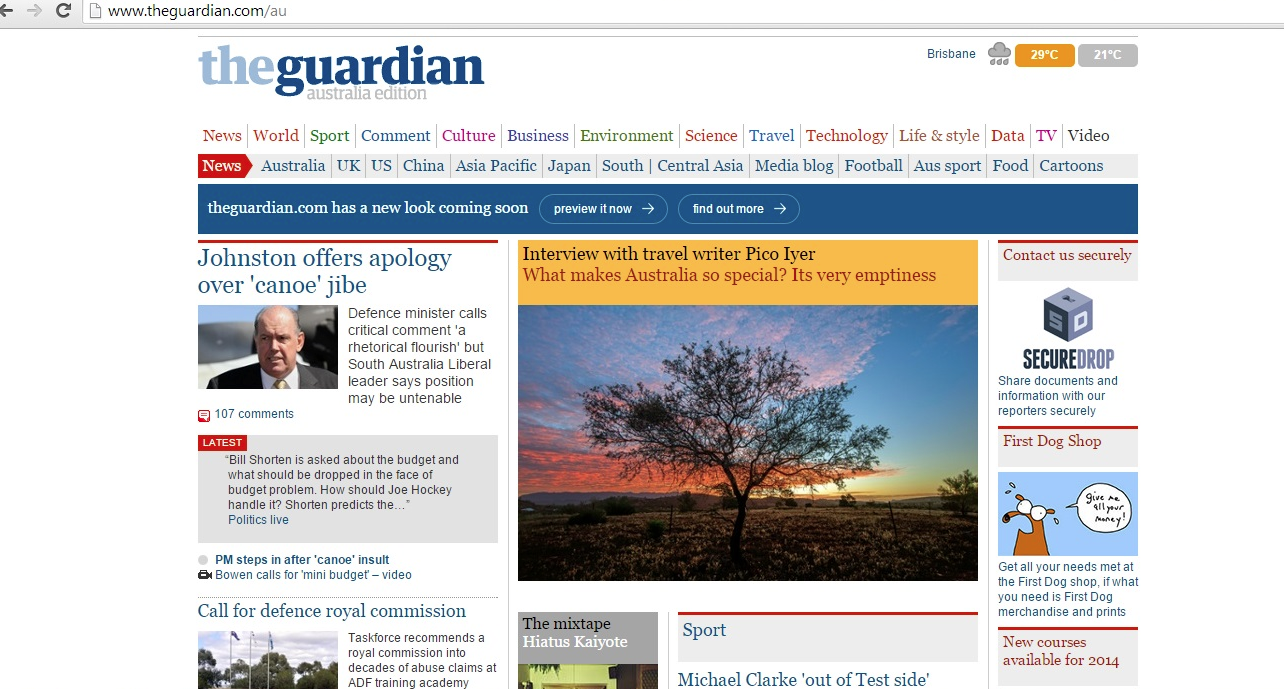 “It has the advantage that you can get the news journalism and the non-news journalism both into the first screen. The disadvantage is all the hierarchy you can assign to news is this vertical column. It all has the same importance and is in a chronological list,” says Blau.

“What our creative director and his team have done is they’ve built a system where this whole grid is incredibly flexible.” 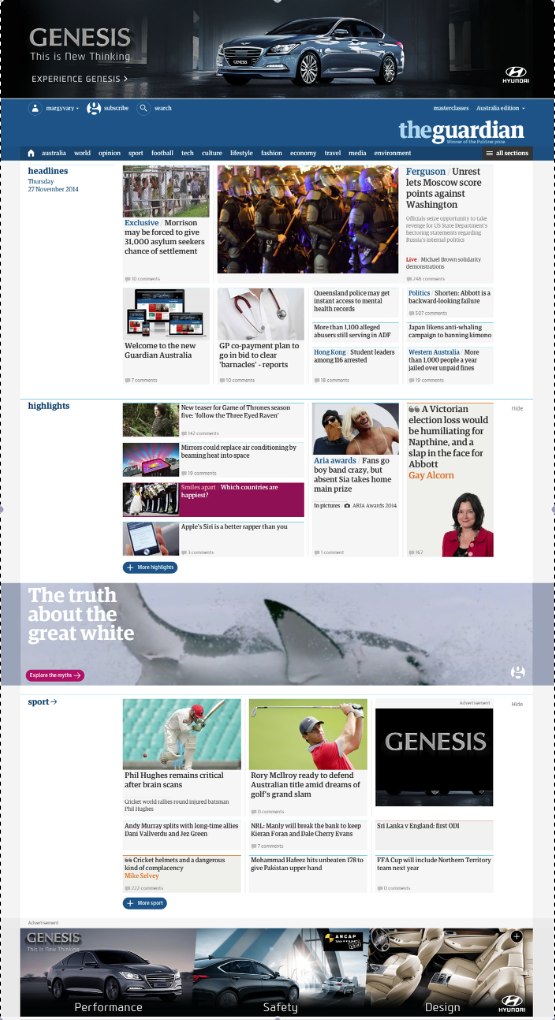 Each of the containers such as the sport, highlights and headline ones shown above can be moved around, giving an easy way to assign importance to stories, instead of just throwing a list at a reader.

“That’s one strong reason that we had to do this, to become a proper breaking news site without hiding the enormous other strengths The Guardian has,” says Blau.

You can’t relaunch anything technical these days without thinking about mobile, and with 53% of The Guardian’s traffic coming from mobile devices McClelland says they had to “future-proof” the site.

He says: “We’ve seen over the past four or five years this dramatic shift of how people are consuming news on devices and where they are, what they’re doing, so I think one of the fundamental changes is our responsive site. It works on multiple devices.”

“What we have been exploring is using a tonal colour language,” he says. “This is in response from user feedback where often on the old site…on the digital products people would often click on a link and be surprised that they perhaps ended up at an opinion piece or a live blog.”

In terms of commercial options, one growing trend The Guardian is keeping in mind for the future is time based ad metrics, where advertisers buy ad space in relation to how long it will be shown for. Over in the States, media publication Adage found that 80% of publishers want to sell ads based on time. As of right now, the new format allows different ad spots to be available.

Blau says: “The first ad that gets scrolled away right now is the one above the header. So we thought about technical ways to show that ad in more places further down. These multi-column websites can’t do that. With these containers you have so many more insertion points, every container barrier is an insertion point.”

The Guardian’s new look and feel will take people out of their comfort zone and likely elicit some sort of response but McClelland says they are ready for it.

“Everyone fears change and I don’t think there’s any way launching a product without some of your audience being dissatisfied. There’s always a contingent of people who are unhappy. What it really is, is it’s unfamiliar,” he says.

“I’m expecting that to happen, there may be a little drop off or there may be some heated debate on the site, but actually that’s not really bad thing, we’re kind of expecting it.”

The US version of The Guardian has already launched and the UK makeover will go live early next year.