Twitter Australia’s managing director Karen Stocks has announced over the platform that she’s departing after two years at the top job.

Stocks was Twitter Australia’s first Managing Director, responsible for local operations including its advertising business and operations. Having been in the local market for almost two years, Twitter Australia has experienced strong growth under Karen’s leadership.

Stocks was recently named one of the Most Influential Women in Australian Media by B&T magazine. She was also guest editor in the last B&T magazine.

A spokesperson for Twitter said, “We thank Karen for her contributions and leadership over the past three years at Twitter. She built up a strong local team and grew our business in Australia into one of the top revenue markets in Asia Pacific today with many innovative, region-first digital advertising campaigns on Twitter with world-class brands.

“We wish her all the best and will continue to invest in this important market to make Twitter the best way to see what’s happening right now in Australia and around the world.

“[current head of online sales] Suzy Nicoletti has been appointed as the new country director for Twitter in Australia and we look forward to continuing to grow our local business with Suzy at the helm. Suzy has been with Twitter for almost three years overseeing the successful growth of our online sales channel.” 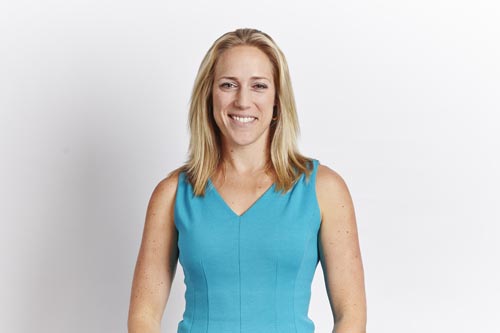 This is the second big news out of Twitter today- with another announcement it’s dumping popular Vine app.

Proud to have built @TwitterAU office as a hub of innovation for the global Twitter business for 3 yrs. Now it’s time to pass the baton on.

We’ve done so much amazing work here. Thank you to all our clients, agencies & partners for your innovation and inspiration every day 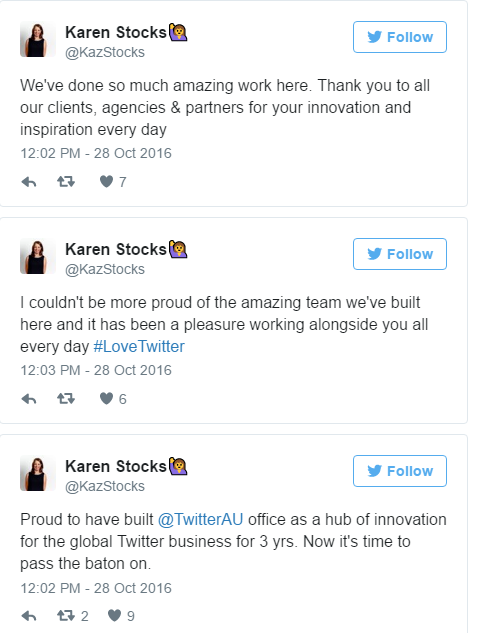 Prior to joining Twitter, Karen had a distinguished six year career at Google. In her most recent role she was the Managing Director, Mobile and Social Solutions, responsible for sales strategy and commercialisation for Google’s Mobile and Social Advertising products across Asia Pacific.

Before joining Google, Karen worked at Vodafone for 12 years, most recently as General Manager for Service Strategy.

Karen holds bachelor’s in Financial Administration, an MBA and is a member of CPA Australia with a passion of bringing new technologies to enhance the customer experience.

Karen loves competitive Netball and Formula1. When she’s not online, she’s walking on the beach or playing taxi to her family.

We wish Stocks all the luck in the world for her future endeavors.