Newly independently owned Gourmet Traveller Wine (GTW), has raised a glass to bid farewell to digital display advertising opting for native only executions for its app version of the magazine.

GT Wine’s director of digital publishing Marne Schwartz, said that one of the most popular sections of its magazine was the wine tasting section.

“The wine tasting starts on page 100 plus, so if you were using an old PDF flipper you’d end up with arthritis by the time you got there,” he said.

Instead under the new version, users are able to start exploring content by category from the home screen. So if someone was interested in only wine reviews, the can access that content immediately and browse between editions rather than being restricted to the old linear format.

Chris Skelton, managing director Adobe ANZ, said that the new version of DPS was aimed at a continuous publishing cycle and one in which publishers could be less reliant on technical app development skills and stick to their content producing knitting.

Michael Stoddart, director, APAC Digital Publishing, said that the page metaphor had “reached the end of its lifecycle”.

Schwartz told B&T that the digital edition has no ads other than native ads, which were worked on with the clients to ensure they were timely and relevant.

An annual deal with Perpetual sees that company on the homescreen of the app, pictured below in a native style app. 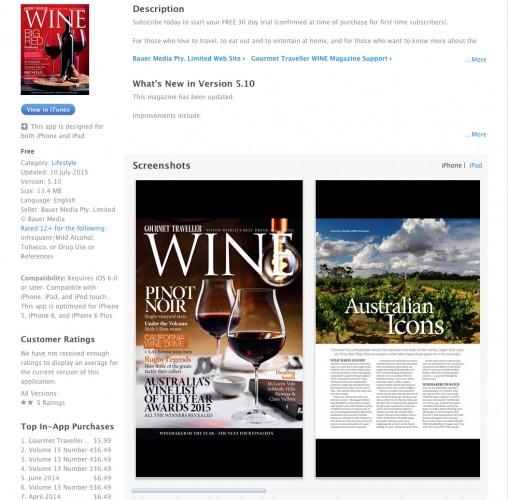 Adobe’s Stoddart, said that one of they key differences of this version of DPS was that you no longer had to download content before an ad became visible, as it was right there in the app store display for example.

Full details of the new release of Adobe’s DPS is in the below release:

Adobe has announced the general availability of Adobe Digital Publishing Solution (DPS), the next generation of its ground-breaking Digital Publishing Suite, with Australian companies taking the lead in pioneering new ways for brands to deliver high-impact content to mobile apps. Using DPS, corporations, universities and media companies can easily repurpose existing content, empowering marketers and designers to create immersive apps, without writing code. These apps can be targeted at internal audiences or made available, through popular app stores, for the general public.

“The new Adobe DPS makes it easier and more cost-effective to deliver beautiful, compelling mobile apps – the kind of apps that stand out from the competition and move brands forward,” said Nick Bogaty, senior director, head of digital publishing at Adobe. “Now, the creation of mobile apps can be entrusted to marketers and designers, the people who know their brand the best.”

“People are spending an average of three hours in an app every day. The new Adobe DPS allows continuous mobile publishing that lets businesses engage with their customers and staff in a way that takes communications out of the hands of technicians and places it into the hands of those who know how to create compelling content,” said Chris Skelton, managing director Adobe ANZ.

Qantas was the first company in the world to launch an app on the new DPS, showcasing its redesigned Qantas Magazine. “Until now, the iPad edition of our publication launched at the same time as the print edition, on the first of every month. This meant customers rarely engaged with the content more than once – they had no reason to,” said Jo Boundy, head of digital and entertainment at Qantas. “Our new Qantas Magazine, created with Digital Publishing Solution, is updated throughout the month, providing readers with fresh, snackable content even when they’re not travelling. In addition to broadening our distribution and improving ongoing engagement, it lets us maximize our content and provide customers with engaging travel information and inspiration every step of their journey.”

Gourmet Traveller Wine has also launched its app, highlighting the ability to put creators, not coders, in control of the content.

“As Australia’s leading and most authoritative wine magazine it was important for us to find a digital publishing solution which offered an organic experience, as opposed to a reinterpretation of a magazine on a screen. The Adobe Digital Publishing Solution is an incredibly flexible platform that allows us to design and distribute content, unrestricted by publication cycles or app updates,” said Dané Stojanovic and Alexander Palmer, Digital Art Directors at Gourmet Traveller Wine.

As well as being available as a standalone offering, Adobe DPS is a core component of the 2015 release of Creative Cloud for enterprise and available as part of Adobe Experience Manager (AEM) Apps, part of Adobe Marketing Cloud. New and enhanced features, include:

• Continuous Publishing. With capabilities to push fresh content live, readers now have more reasons to return frequently to DPS apps for fresh content and updates. Brands have more control over content through integration with AEM, content management systems like Drupal and WordPress; and HTML design tools from Adobe and others – all while still supporting InDesign CC based workflows.

• Engaging Experiences. Apps created with Adobe DPS deliver high-impact content to audiences in a uniquely intuitive way. With the new collections feature, content is now grouped together and delivered to smartphones and tablets on iOS, Android and Windows. DPS also offers all of the app services needed to acquire and retain audiences, including push notifications; in-app messaging; intuitive search and content discovery; and social network integration.

• Built for Business. Adobe DPS now provides a new accounts control system that has been elevated to the enterprise level, enabling organizers to assign permissions to each person involved in the app creation process, both employees and outside agencies.

With custom app development spending on the decline, creative agencies are also adopting Adobe DPS and making it the new standard. In the first two weeks of the DPS beta program, launched on June 17, thousands of creatives from leading design agencies and brands signed up to get early access.

“By putting development in the hands of creatives, DPS empowers us to generate stunning, content-rich experiences, quickly and easily – something never possible with native development,” said Harry Segal, co-founder of Segal Savad, the agency working with Barneys New York to develop The Window, a beautiful, catalog-like app experience. “It’s been wonderful to work with the iconic luxury retailer Barneys New York, and to help amplify their products and point of view using DPS, in an effort to further deepen connections and brand loyalty with their customers. There is also tremendous comfort in using the flexible and intuitive tools we already know and trust from Adobe.”

Seventy-five million unique visitors from more than 244 counties have engaged with these apps, spending 173 million total hours immersed and entertained.

Customers who have released or are planning to release apps today built on this new release of DPS include Barneys, Qantas, National Theatre of Great Britain, and the UNC Kenan-Flagler Business School.