Facebook has challenged members of the global creative and design community Semi Permanent to shift the perception of storytelling on mobile by creating five new pieces inspired by a famous artwork by American portrait photographer Dan Winters. Founder of Semi Permanent Murray Bell, Rebecca Carrasco head of Facebook’s Creative Shop (Australia and New Zealand) and Daniel Mitchell, the artist behind the video discusses the reasons behind the collaboration.

Mitchell is the first artist in the series which will include a fashion photographer, a landscape photographer and publishers, an Archibald-prize winning illustrator and an animator. All of the creative minds were chosen by Murray Bell and the Semi Permanent team: “There is such a great mixture of people that will approach the project in a different way. Sometimes the inspiration from the Dan Winters’ photograph will be obvious or sometimes less obvious” 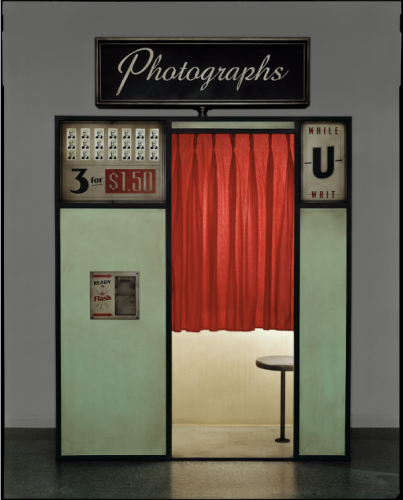 For director and photographer Dan Mitchell (from Rabbit Content), the idea of being alone in a photo booth inspired a story around one little boy doing something which is personal to him. “I thought a photo booth is somewhere you go by yourself, you can be whatever you want to be, try to do funny poses that often don’t work out so well. So I wanted to write this story about a boy who takes these photos, they don’t turn out how he hoped but he’s sort of chasing this dream.”

Creating content designed to be consumed on mobile meant that Mitchell had to consider different ways of storytelling. “I wrote a story that could work without sound, but also using an engaging music track and sound effects which would help tell the story. I would always play the edit on mute and just check that it was communicating correctly. The consumption depends on where you are- sometimes we’re walking down the street, but if you’re on an aeroplane or at home you will listen to the soundtrack. I wanted to make sure it worked on both levels.

“It wasn’t like I could write a story where there was key dialogue which drives the story. This was about communicating almost like a silent movie, all those images had to work really hard without listening to anything.”

Bell is excited that this collaboration breaks with traditional ways of consuming content. “In yesteryear a filmmaker wouldn’t consider their mobile as the total resting place for a film. They would think ‘we’re going to make a music video, it will live on MTV’. Now these types of mobile products can be the best place content can be presented in. There is less of thinking of it as a side-project, but thinking that you’re actually making something specifically for mobile and it will be contained in this.”

For Carraso and Facebook’s Creative Shop ANZ team, the collaboration with Semi Permanent is an opportunity to shift the creative community’s perceptions about using Facebook products to tell a story- to ignite the commercial creative industry’s passion for storytelling through mobile.

“When you’re talking to this type of high-end creative community it’s about getting them to understand that the platform is ready for the kind of work they’ve been doing for years. It’s just about having a creative approach to what can from the outside seem like a more tech-led approach, bringing creative minds to it and challenging what’s possible.

“We have the capability to stream the best that the creative commercial industry can put on the platform, the audience wants to see the best work on the platform because it is in their personal space and mobile is where they are viewing it. That’s why this collaboration is so important because we have the best people proving it for us through the power of storytelling on mobile.”