Coca-Cola South Pacific has announced the next phase of its Coke Come Alive campaign, focused on capturing the voice and attention of consumers over the summer months, with the objective of recruiting drinkers as well as engaging with existing Coke loyalists.

The Coke Come Alive campaign will turn up the heat with the launch of another major Coca-Cola innovation – colour-changing packaging that makes the products themselves ‘come alive’ with colour. The packaging will be transformed with colour when it is chilled to the optimal temperature to enjoy. 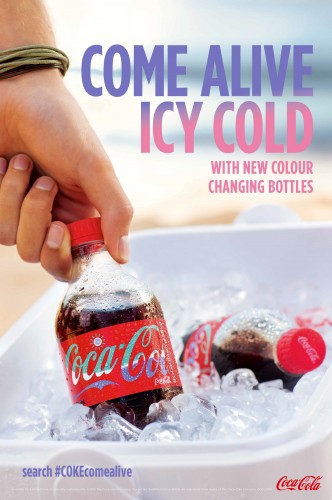 The new packaging is part of a multi-million dollar push over the summer, with a major national integrated campaign and is an evolution of the award winning #colouryoursummer campaign. Back this year will be image recognition technology which will allow Australians to use their Coca-Cola products to unlock unique experiences. Consumers will be able take a snap of their Coke products, when they have come alive with colour, and win unique experiences, content and more. This year the image recognition technology will be able to recognise ‘Come Alive’ colour packs across the entire trademark – Coke, Diet Coke, Coke Zero and Coke Life, as well as recognise packs that feature in our campaign advertising.

A key pillar of the campaign strategy revolves around working with some of Australia’s biggest teen celebrities. For the second year running Coke have an exclusive partnership with the Universal Music Brand Partnerships Division to identify and recruit a number of influential artists this summer including Troye Sivan, Cody Simpson and Tigerlily. Their teen fans, thanks to Coca-Cola, will win access to a series of unique events and experiences across the summer. The artists will also feature alongside other key teen influencers in the social media space, to produce content and amplify the campaign across their channels.

High-impact outdoor advertising will drive campaign awareness with locations strategically selected aligned to youth hotspots. There will also be a suite of Coke Come Alive point-of-sale materials available in stores across the country with youth-centric items enabling the brand to increase its connection to the market.

Dianne Everett, group marketing manager Coca-Cola Trademark, Coca-Cola South Pacific, said: “We are thrilled to launch the next exciting phase of the Coke Come Alive campaign. We believe it will provide a platform which will excite people about this iconic brand over summer.”

“In addition to introducing yet another Coke-first to the market, with our spectacular colour-changing packaging, we are delighted to be working with some of Australia’s most popular young talent, who have great appeal to our target audience. We’re looking forward to bringing our strategy to life over the summer months and igniting a conversation with both existing and new consumers.”