Five days in, nearly ten thousand votes amassed, and a plethora of tactics we hadn’t seen before: People’s Choice is going off its rocker.

Proving why they work in this industry, hopefuls for People’s Choice are utilising their skillsets to snag as many votes as possible. And we are loving it!

While Monday saw Thomas Winch from News Corp in the lead, his colleague Meagan Gray has surged ahead to be in first place now. (See the bottom for the current top ten). Too, the Daily Mail’s entrant Kane Reiken has had a voting boom. Are the organisations getting behind their young starlets? Does this mean size does matter? We ponder the speculation…

Tuesday morning also heard a surprised squeal from B&T’s sales manager Cat Hay as an EDM popped into her inbox for soliciting votes for one entrant.

Henry Smith from Taste Creative is digging into his digital marketing capabilities, sending out an adorable EDM for votes.

“I really don’t like self-promotion, hence the shortness of this email! I have been shortlisted in the upcoming B&T 30 Under 30 awards, and would love your vote for people’s choice,” he wrote.

“Since I was a kid I always wanted to use the talents I had to help people, and fast forward 27 years and today I am thrilled that I get to do this everyday with a team of just as passionate creatives.” 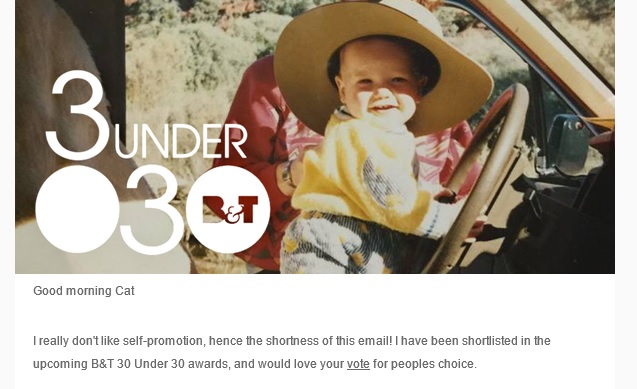 So this is me at 4, a tad excited about getting the Super Craft Kit for Christmas. 23 years later I found out they give out awards for this sort of behaviour! I’d love your vote for People’s Choice for the @bandtmag 30 Under 30 Awards! Link on my FB (only takes 2.31 seconds)

Social media is clearly the place to grab the votes, as confirmed by last year’s winner Tanya Moore. Moore is back spruiking the votes on LinkedIn, as Onder Vincent Koc and others are hitting up the Twittersphere.

Our Search leaders @Adam_steward & @dvanc are up for @bandt #BT30u30 Do yourself (ok us) a favour & vote for them https://t.co/tvKH5Qjajm

Voting has begun for @bandt‘s 30 under 30! Support our Marketing Manager, Michaela Piper, in the Media Category https://t.co/UngCCsmsR8

My bro is nominated as Australia’s marketing industry’s 30 most successful people under 30. Vote for him. Matt Fahd https://t.co/kAns12wCx7

Look at that! Our very own @_EmilyMalone_ in the top 10. Proud to have 3 @ntegrityagency strategists to vote for https://t.co/z7yhnYhyFS

As of 9am this morning the current leaderboard stands as:

Thank you to all our wonderful sponsors, and The Newspaper Works as principal sponsor. And vote here for People’s Choice. 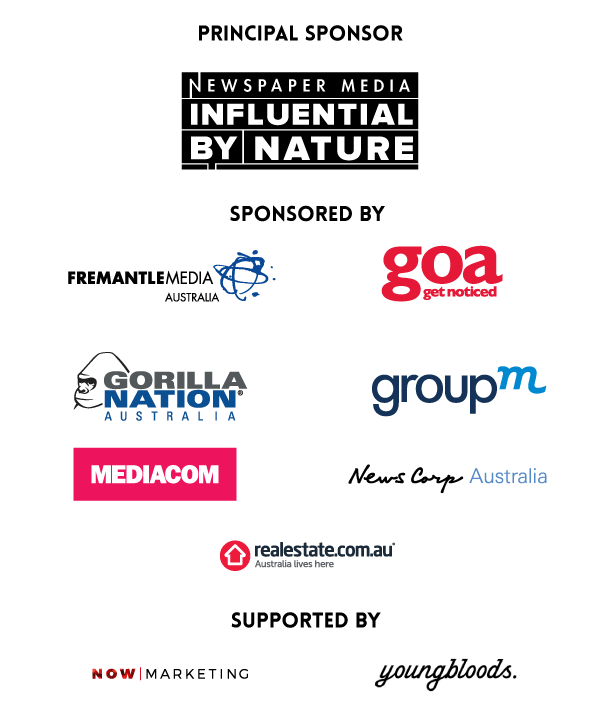