B&T’s foremost columnist, Robert Strothfeldt from Strothfeldt Consulting, is back again with his latest piece. This time he takes a look at big data in agency land. And, he argues, it’s not about the data but how you use it…

With the rapid growth in the volume and importance of data in marketing and advertising/communications, there needs to be a basic understanding of how to handle data and the ability to differentiate between quality and junk science.  To get down and dirty and work the numbers requires more than just “statistics” that most study in business, marketing or a social science degree. As argued in a previous article, a solid background in pure mathematics is required.  But to interpret the results does not require an in-depth understanding of the laws of mathematics. Just the ability to ask questions when something “doesn’t make sense” based on common sense and experience.  But most people are “scared” of maths. Their eyes roll up in their heads when shown a table of numbers and all thinking shuts down.

This point was driven home to me sitting in a presentation by one of Australia’s largest media buying and planning companies. They claimed to have a proprietary algorithm which predicted brand awareness. It was junk science, yet all 14 people in the room believed it without question. It didn’t require even junior high school maths to know it was junk. There was ample common sense and experience in the room to see it was flawed, but the thinking was – “It’s a computer algorithm on statistics, so it must be right.”

Many years ago, one of my pure maths lecturers showed me how to “prove” 2=1 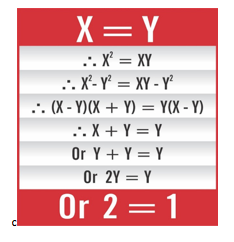 Obviously 2 does not equal 1. There is only one “error” in this equation. Can you identify what it is?

To make it interesting a choice of bottle of the latest vintage Penfolds St Henri or Bollinger (non-vintage, it’s not that hard) to the first correct answer. Please advise where to send the bottle to B&T…

The purpose of this exercise? Well, by making just one simple mistake, we end up with a ludicrous result. In this instance, this is obvious, but what of the many times when the answer is not so obviously wrong? How many times has junk science led to bad decisions?

We hear of many “case studies” resulting in great success. Is this like the gambler who tells you only about the wins? Or maybe the success was due to other contributing factors, not just specific “big data” learnings and resulting initiatives?

As a creative director, my interest in the use of data and maths is mainly with advertising/communications.

A recent article on the waning effectiveness of advertising used numbers to support the hypothesis. A company (won’t name, but benefit from clients believing advertising in general is rapidly becoming less effective) published, in their monthly blog/newsletter, survey results by Deloitte. The results showed that in 2013, some 70 per cent of respondents stated they were alerted to retail events by advertising. By 2015, this figure had dropped to 30 per cent . When information is published by Deloitte, KPMG, PwC etc. we can safely assume the methodology is beyond reproach.

It is also another example of the threat advisory and management consulting firms pose to advertising agencies. They are already in there presenting to the CEO and board on advertising strategy and effectiveness. How long before they take the next step and offer a content/creative service? (Yep, creatives in Zegna suits).

But what about the interpretation? How did the missing 40 per cent hear about the retail offers or events? Other studies by retailers in the US (Macey’s was one) showed customers were using smart phones to either photograph in-store product specials or just send a message to advise others about retail offers and events they had been altered to through various forms of advertising. When questioned “How did you hear about this sale/product/etc.?” advertising was not credited, even though it was the start of the tail.

In marketing and advertising, as opposed to pure scientific research, there is nearly always a vested or conflict of interest involved. The research and articles will have a spin which favours the type of service the author provides.  In this instance the spin was “advertising is no longer effective, but we have the answer.”

Advertising, or communications, has and always should be about using science to provide insights for the brief.  The art should then take over, using these valuable insights to create a message that is relevant and impactful to the right people at the right time.

But now, with more and more data at our disposal, the trend is towards designing creative/messages by formula.

The purpose of this article is not to get bogged down in boring (some may say irrelevant) research methodology. The point I am trying to make is that with so much data and information now available on just about everything consumers do, eat, watch and drink etc. the tendency is to try to quantify the qualitative, to take creativity out of the process. We are trending to “creative by formula”.

I had the pleasure and privilege of being in an ad agency partnership with Grahame Bond, the creator of the legendary “Aunty Jack” series on the ABC.  (Younger readers may not have heard of the series. Google it or ask your parents).

Many times Graham has said to me that Aunty Jack would never be made today – breaking new ground and so many “rules”, the numbers crunches would have killed it. The arbiters of what to and what not to run only use numbers, rather than look at them in conjunction with finely honed experience and “gut feel” to make decisions. (Steve Jobs said many times you cannot ask people to rate the appeal of something they have had not seen before).

Advertising could be surmised as “Where Science Meets Art”. But we are evolving to the point where “Science Dictates Art”. (Too much science and not enough art)

Good science (as opposed to junk science) is an integral component of the creative process.  It provides the insights for the creative process to act upon. As the old saying goes, research (and big data falls under this category) is like a lamp post. It is there to cast light, to illuminate, not to lean on.