The latest results from Roy Morgan show that in the 12 months to December 2017, Woolworths had 32.2 per cent of Australia’s total grocery market (including fresh food) – an increase of 0.8 per cent over its 2016 result.

These results are from the Roy Morgan Single Source survey of over 50,000 people per annum, including over 12,000 grocery buyers.

There is clearly a lack of loyalty when it comes to supermarket shopping, with very few customers only shopping at one supermarket.

An example of this is that although 72.7 per cent of grocery buyers shop at Woolworths, a much lower eight per cent shop only at Woolworths.

It is a similar situation with Coles shoppers, where 70 per cent shop but only 6.6 per cent shop exclusively. The store overlap in shoppers of the big two is very large with over half of them shopping at both Coles and Woolworths. 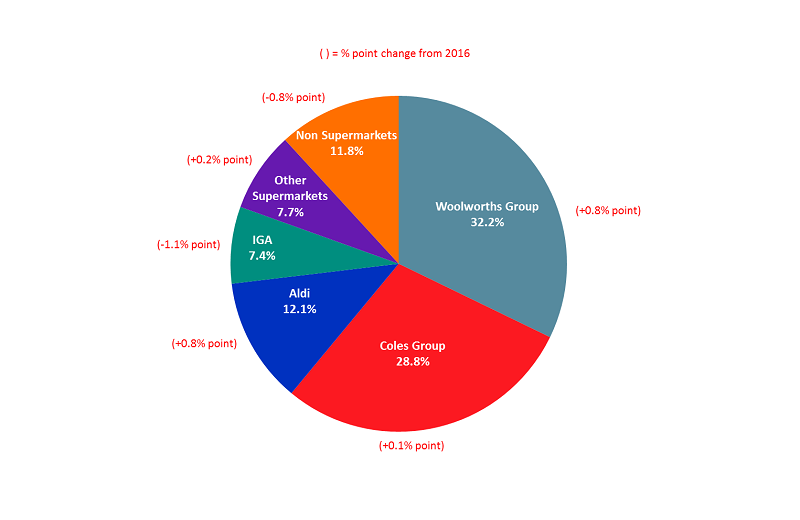 Non-supermarket food retailers such as butchers, fruit shops, markets, and convenience stores currently have 11.8 per cent market share, but are showing some weakness over the last year, being down by a combined 0.8per cent points.

All of the major supermarkets have a lower market share of the fresh food market than their overall grocery market share. This is a result of the speciality retailers that compete in the fresh food segment such as bread shops, fruit shops, butchers, seafood retailers etc.

The best performers in this segment are the non-supermarket group with 30.2 per cent share, followed by Woolworths (26.7 per cent), Coles (24.5 per cent) and ALDI (nine per cent). 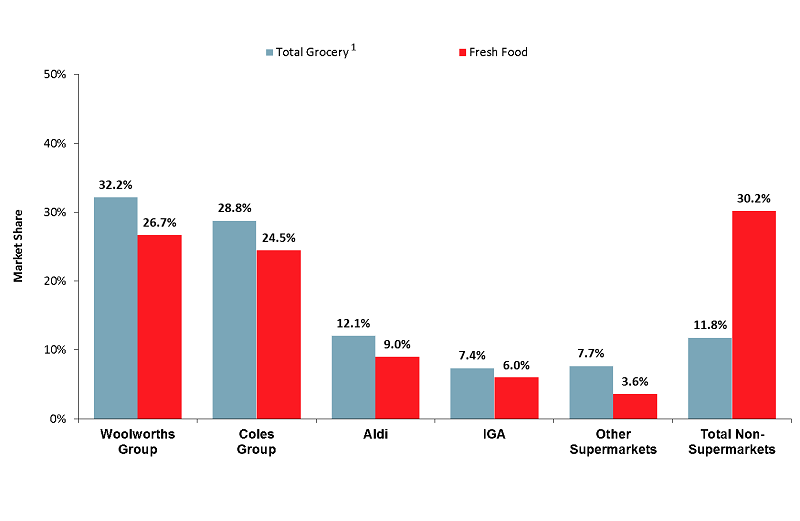 Commenting on the study, Roy Morgan’s industry communications Director, Norman Morris, said: “The recent announcement by Wesfarmers to demerge Coles is likely to result in increased pressure in this highly competitive $100b plus grocery market.

“When Coles becomes listed on the ASX, it is likely to lead to increased analysis and pressure on their financial results and the obvious comparison with Woolworths.

“Woolworths currently appears to have an edge over Coles, but both are facing increasing competition from Aldi and the arrival of others including Kaufland and Lidl that will put even more pressure on this market.

“Lack of loyalty among supermarket shoppers that we have seen in this release presents both a major opportunity for current players to gain customers but also a good environment for new entrants to build a customer base like we have seen with Aldi.

“The current aim of the major supermarkets to be positioned as being strong in ‘fresh food’ is a result of it being seen as an area of major growth potential. This market is very significant, with an estimated annual turnover of over $40 billion or nearly 40 per cent of the total grocery market.