Storyation co-founder and head of content Lauren Quaintance gets out her crystal ball to predict what will happen in content marketing in Australia in 2016.

It’s December which means it’s time for the inevitable predictions about the year ahead. Since we launched our content agency Storyation more than two years ago we’ve seen things move at lightning speed.

You only need to look at the historic search volumes for the term ‘content marketing’ on Google (see below) to understand how quickly this relatively new discipline has gone mainstream. 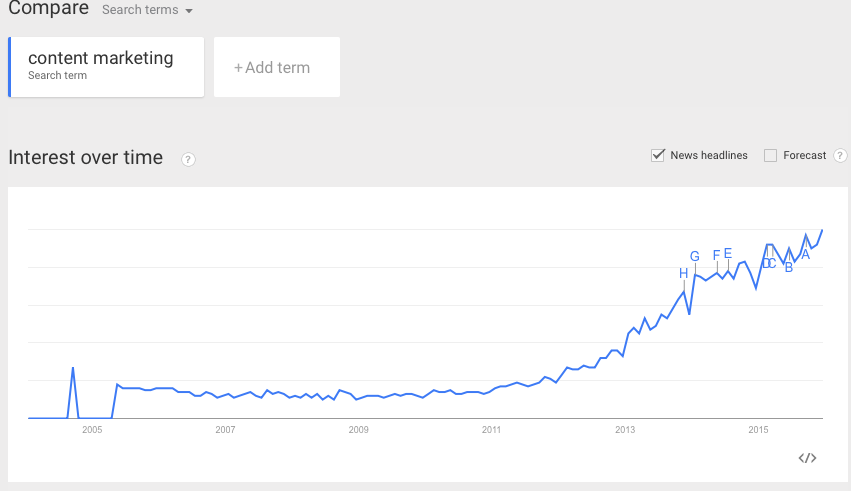 While Australia is undoubtedly still a couple of years behind the US, we’ve seen more and more CMOs – especially in travel, financial services and insurance – add content to their marketing arsenal. So what’s ahead in 2016? Let me polish my crystal ball…

The Ad Blocking Apocalypse Will Continue

While ad blocking is more common on desktops than mobile so far, one in 10 internet users in the UK and the US now use an ad blocker.

Given that rates in some countries have doubled in 12 months – and mobile ad blocking is on the rise – we can expect that the age of ad blocking is here to stay. If nothing else, this will force more marketers to focus on creating content that people actually want to read and share.

There Will Be more Video Storytelling (Not Just Video)

There’s no doubt that video is a phenomenon to be reckoned with. By 2017 video will account for 69 per cent of all consumer internet traffic, according to Cisco.

But too few brands think that video is pretty pictures set to music which is, frankly, little more than visual wallpaper. As the market becomes flooded with more and more content in 2016, the brands that will truly stand-out out will be the ones who know every video needs an idea behind it.

The best and brightest will borrow from documentary filmmakers to find stories that move us – that make us laugh, cry and think.

This is already happening overseas. We’re seeing the rise of executive-level positions, such as the official-sounding chief content officer, that have a seat at the leadership table.

Instead of assuming that content marketing is a just tactic to be handed to a junior digital content or social media manager (as is so often the case in Australia) large global organisations such as Coca-Cola have identified someone needs to drive the culture and own the strategy and budget.

It used to be that content marketing was driven almost entirely by SEO as brands battled to beat Google’s algorithms and get to the top of the first page of search results.

Performance in search is still important but as new tools such as Google’s Knowledge Graph – essentially pop-out boxes that circumvent the need to click on websites for answers to simple questions – brands will be forced to start tackling more complex topics.

Add to that the fact long stories are more likely to be shared on social media and you have a compelling case for long form.

But There Will Still Be Room for Micro Stories

But while there is undoubtedly a thirst for more substantial, nourishing brand stories it is also true that we are more impatient than ever.

Look at the success of Humans of New York on Facebook (a mere 16.2 million followers) and you will understand the power of visual stories with extended captions that capture an authentic true story. Not everything needs to be a 500-word blog post or a 90 second video.

Whatever comes to pass, in 2016 the need for good content that people actually want to consume – and that is strategically-aligned to your brand’s purpose – will only be greater.