Harvey Norman has held onto its position as Australia’s top advertiser with $250 million annual spend, according to Nielsen’s 2018 Advertiser Report.

The report provides a comprehensive summary of Australian advertising activity, by media type, over the past 12 months.

At an advertiser level, Harvey Norman led total spend, increasing their reported spend by 33 per cent compared to 2017. At an executional level, Mitsubishi had the highest largest single spend for an ad, followed by Westpac’s ‘We Could be Heroes’ campaign. 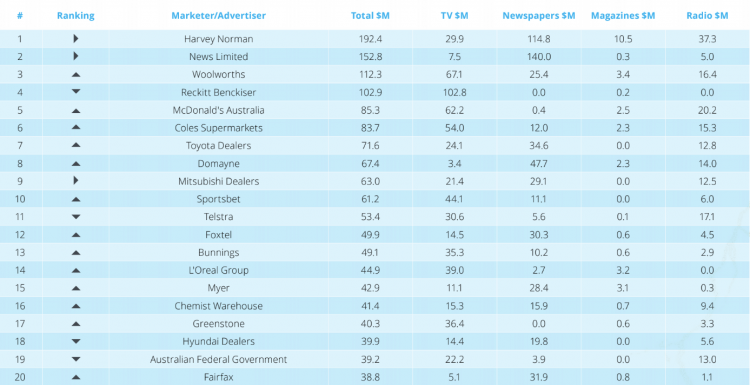 In terms of categories, the automotive industry (retail) led total spend for the sixth consecutive year with $497.4 million spent on advertising, followed by homewares retail ($449.8m).

It was also a big year of changes in ad spend. 2018 saw seven new sectors enter the Top 10 Rising Sectors Report when compared to the previous year.

Sector growth, however, has slowed dramatically with the lowest percentage increase being just 3 per cent, considerably lower than 2017’s tenth position which was telecommunications with an increase of 19 per cent.

One of the key themes to emerge among the growth categories in 2018 is digitisation: home
automation, fantasy sports and sports betting are all new entrants and all placed in the list’s top five.

In 2018 the sectors that recorded a decrease in ad spend ranged from -3 per cent to -35 per cent. There were seven new categories to enter the Shrinking Sectors list versus 2017.

One of the key themes uncovered by this list is a marked decline in spend in health and beauty categories such as fragrances (-35 per cent), cosmetics (-29 per cent), haircare (-21 per cent) and female skincare (-8 per cent). This trend could indicate a shift toward advertisers using more digital media, celebrities and influencers on social media to promote these brands.