They’re ads you might recognise and brand logos you would’ve seen a thousand times or more, but in a new project, the world’s first LGBT marketing and advertising organisation PrideAM has given them a new twist by recreating them with lesbian couples.

Partnering with Europe’s only mainstream lesbian and bisexual magazine, Diva, the group created a contest that asked agencies to update these very heterosexual ads from very prominent brands for 2016.

The magazine read, “Diva and Pride AM’s Scott Knox asked agencies to re-engineer an ad from the past or present, whilst ensuring no intellectual property infringement, to demonstrate that heteronormative assumptions about lesbians and bi women have no place in a forward-thinking advertising culture.”

“There are no prizes for guessing why patriarchal orthodoxy still reigns – heterosexual men often head up the top jobs and still control what we are permitted to see,” Diva‘s editor Jane Czyzselska said.

“In launching our competition we hoped we’d shake things up a bit in the industry, which seems uncharacteristically coy where LGBT consumers are concerned.”

There were three winners of the contest, with each providing an explanation for how and why they reimagined the ads for a modern audience, according to PinkNews. 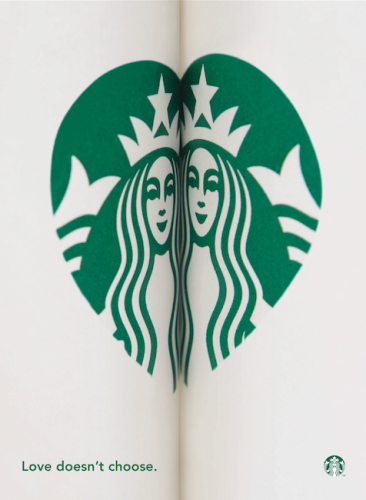 “We had some great ideas for a variety of brands but Starbucks was the most natural and purest fit that shone out from the rest.

“The simple but elegant use of the Starbucks- branded coffee cups, positions dual sirens as kissing partners and is supported by a strong and emotionally resonant copy line: ‘Love doesn’t choose’.”

Scott Knox of PrideAM added, per PinkNews reports, “It would be great to see Starbucks roll this out internationally. As a simple campaign idea it would really catch on and add the Starbucks might to the growing list of corporate names supporting the LGBT+ equality agenda.”

2nd place: Iris: This is the Real Thing (Coca-Cola) 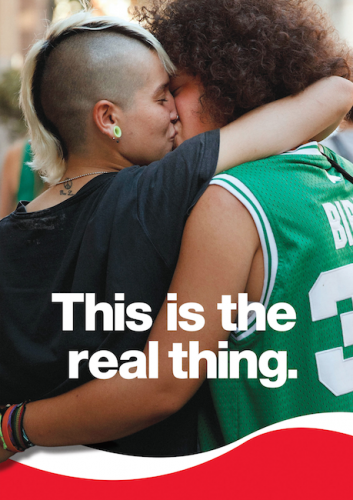 “In the last few years, we’ve started seeing gay couples in ads, but it tends to feel either tokenistic or exploitative; good-looking ‘two dads’ types or sexy lesbians fresh from a Nuts centrefold.

“We wanted to make an ad with a real couple that positively reflects our culture today.

“When it came to choosing a brand for our realistic representation, we turned to the most iconic of them all – one that’s been boasting its authentic credentials as ‘the real thing’ since 1969.” 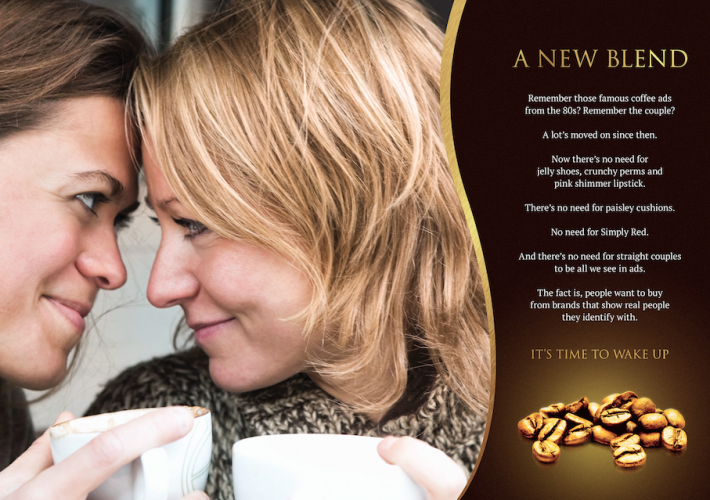 “Arguably, the 80s introduced the most famous couple in UK TV advertising history.

“Their will-they-won’t-they story played out over 12 installments and six years. The couple’s popularity made them cultural icons of the time, and that made us think about how much has changed over the last 30 years.

“There’s plenty we’ve left behind when it comes to tastes and attitudes, and heteronormative assumptions are just as out of date.

“This is the point we’re making in the ad – it’s a rallying cry to an industry that considers itself a cultural trailblazer. Executing the idea, we’ve tried to persuade with a firm but gentle hand. It’s not a flag-waving, shouty kind of message.

“By switching the original lovers for a lesbian couple, we hope to make the viewer look twice. Then think twice.”