Radio and TV personality Eddie McGuire has vowed to sue Facebook Australia over a fake post that inferred the 53-year-old suffered from erectile dysfunction.

The news post was mocked-up to look like a page from GQ Australia and suggested McGuire had partnered with US talk show host Dr Phil to create an impotence pill called “TryVexan”. 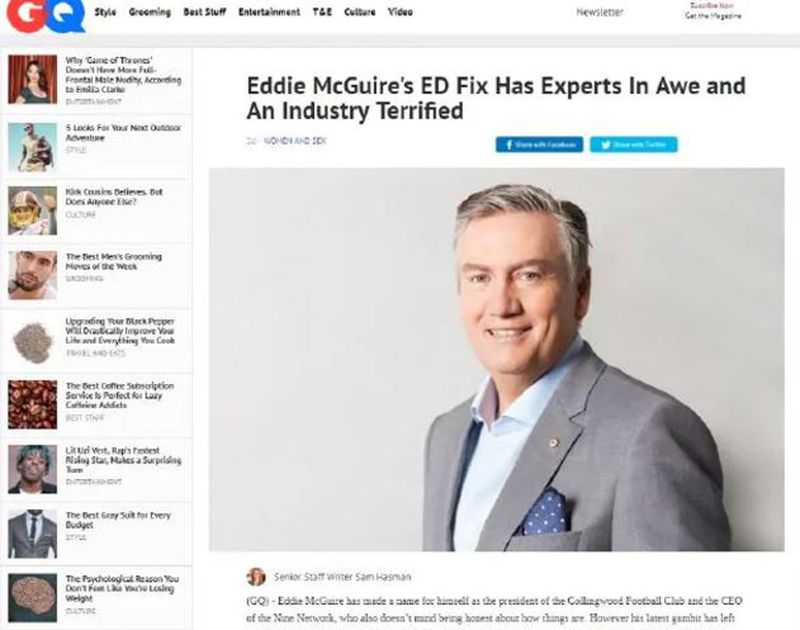 “I am so confident in the product Dr Phil and I have created that I am offering free samples to our viewers,” the bogus story reported.

Facebook has since removed the offending article, while a company spokesperson told B&T: “We do not allow adverts which are misleading or false on Facebook and Eddie should report any adverts that infringe his rights and they will be removed.”

However, McGuire has told his Triple M listeners in Melbourne he plans to sue the tech behemoth.

“Clearly this is defamatory against me and it’s illegal to use someone’s likeness and purport it to be them,” he said. “I’m gonna sue their arse off.

“This is a week after Facebook has just been excoriated in America about false news and they’re able to just run a completely bogus ad,” he said.

“It’s not only fake news, it’s defamatory and it’s incorrect.”

McGuire latter told 9NEWS: “My legal advisers today tell me it’s some company out of Panama via Los Angeles, and somehow it ends up on Facebook without any checking and suddenly it’s out there for public consumption.

“How Facebook can actually publish this in Australia has got me beat.

“The last thing I want anybody to do is to think, because my image is involved in this, that this drug is safe.

“I’ve got no idea whether this drug is safe or otherwise but certainly in my situation, I’ve got nothing to do with it and I recommend, given this is their modus operandi, to stay as far away from it as you possibly can,” McGuire said.