Thursday night was billed as a sports lovers dream. The Socceroos World Cup qualifier against Saudi Arabia, up against grand final replays in both the NRL and the AFL. So who won the bragging rights? Well, that honour goes to the AFL and the Swans victory over the Bulldogs.

The AFL on Seven pulled in 464,000, while Nine’s Sharks-Storm pulled 372,000 according to OzTam viewer numbers in Sydney and Melbourne only.

Meanwhile, the Socceroos World Cup qualifier was the top rating show on multi-channels, but only mustered a disappointing 262,000 viewers.

Sadly, the game was marred when the Socceroos rivals, Saudi Arabia, refused to take part in a minutes silence for victims of the recent London terror attacks that included the death of two Australians. One of the victim, Kirsty Boden, was from South Australia, leading to loud boos from the Adelaide crowd.

It has been reported that the London attackers had Saudi backgrounds. 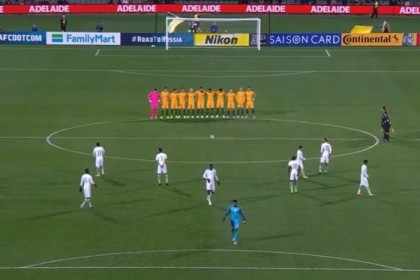 It’s unclear if the team simply refused or hadn’t realised what was happening. Interestingly, a Saudi spokesperson said the pre-game acknowledgment wasn’t a “tradition…. keeping with Saudi culture”. However, media has reported the team doing it on previous occasions at other international matches.

This has lead some to believe that the team somehow supported the attacks.

Labor frontbencher Anthony Albanese led a chorus of condemnation over the team’s apparent lack of respect. “That was a disgraceful lack of respect not just for the two Australians killed, one of whom was a young South Australian, but also all of those victims of that terror attack in London,” Albanese told Channel Nine.

“There is no excuse here. This isn’t about culture, this is about a lack of respect. I thought it was disgraceful,” he fumed.

Media regular and comic, Dave Hughes, went further, calling for the team to be banned from ever entering Australia again. 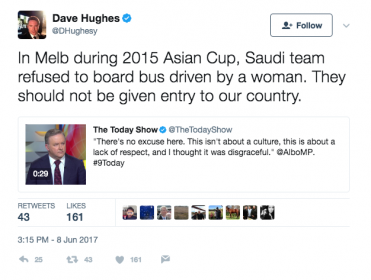 In a tweet this morning, Hughes posted it wasn’t the first time the Saudi team had caused controversy. In 2015, the team, playing in the Asian Cup refused to board a bus driven by a woman.

“The lack of respect shown by Saudi Football last night demonstrates why Western culture is superior to Islamic one,” he said.

The Saudi team management has since issued an apology that read: “The Saudi Arabian Football Federation deeply regrets and unreservedly apologises for any offense caused by the failure of some members of the representative team of the Kingdom of Saudi Arabia to formally observe the one minute’s silence in memory of the victims of the London terrorist attack on June 3rd, 2017, prior to the World Cup Qualifying match against Australia in Adelaide.”