Gruen stalwart and Channel Ten executive general manager Russel Howcroft has released his first book. When It’s Right To Be Wrong is his take on the current state and tribulations of media and aimed at Adland or anyone else interested in its machinations. He spoke to B&T about why he put pen to paper…

What was the reasoning behind the book? And, having read it, it’s quite Adland-ey…
Hopefully there are lots of people out there with an hour to spare. I think there’s a market for books such as this, I think I can see it being purchased at the airport – it’s a short-haul flight to read. 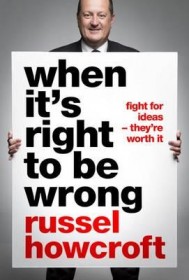 I don’t have to work in agency-land to enjoy it?
No, not at all. I’ve had feedback from non-advertising people who’ve really enjoyed the book and from other people involved in media generally. Obviously my experience in advertising has driven an enormous amount of what’s in the book and, also, if you go back to the very first relaunched issue of B&T there’s an article I wrote called ‘100 things I like about advertising’ and that article was almost a launching pad for When It’s Right To Be Wrong.

The book celebrates creatives and the creative process. But many would argue creatives and industry mavericks have been forgotten in the race for dollars?
I think there are still a number of creative mavericks who’ve made a brilliant career for themselves. The creative entrepreneur has always been a really important part of our industry.  Out top agencies – Leo Burnett, Young and Rubicam, Ogilvy, Saatchi and Saatchi… the creative entrepreneurs have always been an important part of their success. And in the modern times you need to look at guys like Ted Horton at Big Red, Sean Cummins at Cummins&Partners; you have to give credit to BMF who were (B&T’s) agency of the decade, so the creative maverick and the creative entrepreneur still exist and still have the opportunity for success. But I do certainly agree we should get more excited by people who think differently.

A common gripe – whether it’s true or not – is that the local industry can be a little tame and that stems from a lack of talent. How much would you agree with that?
I don’t think we need to talk down our industry. We need to be celebrating great campaigns, great clients and great successes. In the book I like to talk about the buyer. The buyer is the most important person in the creative transaction. No idea exists without a buyer. It’s all well and good to have clever ideas but what we need are great buyers of ideas, we need people who are enthusiastic and energised about doing things that are new and different and cut-though.

In the book – and on Gruen – you fly-the-flag for free-to-air TV. However, the facts are that medium is suffering, viewers are turning off; why do you think it remains so important?
Because millions of people watch it every single night.

Decreasingly so, however…
There’s still millions and millions of people watching it every night. Fourteen and a half million Australians watch TV every single day. The best thing that’s happened to TV has been the second and the third screen – we now watch TV with at least one if not two other screens. Why is that important? That means you can react to advertising immediately. When I first started in advertising there was a long time before people realised the transaction had been achieved, but now the line is very, very short; it’s immediate. And that’s very exciting. TV is now a direct response medium.

In the book you say you’re still a strong advocate of print – of newspapers and magazines. Looking at any media you think is under real pressure, what would it be?
All media’s future is in their own hands. It’s how they market it and how they market it to advertisers.

You also say that journalists need to be more commercially minded to survive; but how do you even begin to change that thinking of ‘church and state’ that’s drilled into many journos?
No, I’m not suggesting that at all. The media is there to connect buyers and sellers, it’s a commercial platform and that’s what I am very interested in.

You say in the book that digital marketing won’t make brands famous. What do you mean by that and why do brands even need to be famous in the first place?
Fame is just another word for well-known and it’s just brand awareness. And brand awareness matters because there’s a correlation between awareness and sales, so that’s absolutely critical. Brands who just rely on digital media to create ubiquitous brand awareness, they will struggle. Take a digital brand like Uber, we discount the role that mainstream media has had in creating Uber’s fame. Mainstream media talks about, writes, discusses these digital platforms and, in effect, these become a mainstream ad for these brands.

You’re a big fan of the power of government advertising to get a politician’s message out. We’ll probably have a federal election in the next 6-12 months, got any advice for Bill Shorten?Advertising will play a huge role for all the parties. There’s a creative challenge there to see how they can affect things.

You talk about the importance of recruitment in the book. However, do you think that shows like Gruen have glamourised the industry and attracted people to it that perhaps shouldn’t be in it?
You’ll only get a job if you’re good enough. You can be attracted to it but you’ll only be employable unless you know what you are doing. Or, if you’re a junior, be seen to have the potential to know what you are doing.

You’ve been in the industry for a long time and in the book you say you long for the days of good writers. In this race for all things digital, have we lost some basic and important skills?
The ability to write creatively and persuasively, to write with a selling message and in an engaging way is a very refined, difficult skill, and, in the end, that’s what you need, you need great writers. For me it’s the beginning and it’s the end of it and we should just seek out the great writers.

The book touches on a lot of industry issues. For you, what’s the one big hairy gorilla in Adland’s room that needs addressing?
I maintain that it’s not just agencies, it’s the broader media communications landscape and they’re discounting the power of television and that is an error.

You openly confess in the book to not writing about Google or Apple. Nor do you ever mention the word data…
Forgive me for not doing it.

No, it was refreshing. Things like big data is all you fucking ever hear about in this industry. Your book was a breath of fresh air!
Ha, ha, ha! I’d just say that data is not going away. I know there are people who are really skilled at making data work for them, work for the company, work for clients; but the book is more about the immeasurable.

What will the agency of the future look like?
It will have great writers. It will get back to having great creatives, persuasives and sales-orientated writers.

You won’t answer this but I’ll ask it anyway: any brands in this country that you look at their advertising, their marketing, and you think “that is just fucking terrible”?
Ha, ha, ha! I don’t like coming from that from a negative start. I’ve got no answer to that question. I’d prefer to find the good stuff, to celebrate the good stuff.

Lastly, Gruen just goes from strength to strength. Why do you think it has such appeal with audiences?
I think advertising is mainstream and it affects everybody. The reason Gruen was created in the first place was to show this industry that all of us see in abundance every single day and I think Gruen created a badly needed discussion around it. More excitingly I think people enjoy it because it’s about ideas and people really love looking at terrific advertising ideas.