The Olympics – encompassing both Summer and Winter Olympics – is Australia’s most popular TV sporting viewing experience with nearly 8.7 million Australians watching the Olympics almost always or occasionally when on TV.

According to newly released research by Roy Morgan, AFL is the leading domestic sport with almost 7.7 million Australians watching various AFL sporting events on TV headlined by the 6.5 million that watch the AFL Grand Final. 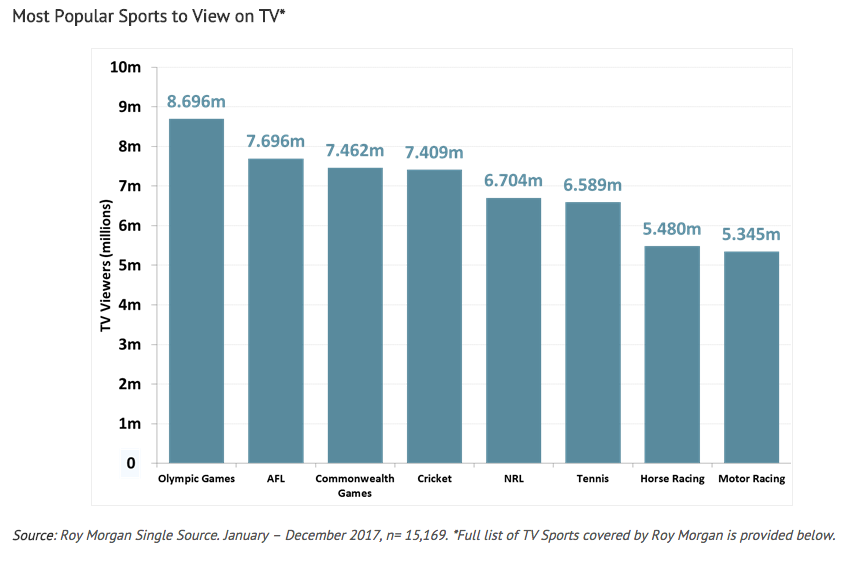 Although only in its second year, 2.7 million Australians already watch the AFL Women’s (AFLW) on TV. These figures put the AFL just ahead of the upcoming Gold Coast Commonwealth Games with 7.5 million viewers and Australia’s favourite summer sport of cricket on 7.4 million viewers.

Two other sports attract over six million TV viewers including the NRL which attracts 6.7 million viewers with its most popular sporting event the annual State of Origin – with 5.8 million viewers and the traditional summer sport of tennis with nearly 6.6 million viewers although viewing of tennis is heavily skewed towards the Australian Open – watched by almost 6.5 million viewers.

Horse racing, which attracts almost 5.5 million TV viewers including just under 5.4 million to watch the Melbourne Cup on the first Tuesday of November and motor racing with over 5.3 million viewers are the only other sports to attract over 5 million TV viewers. The Bathurst 1000 in early October is the most popular motor racing event on TV each year attracting nearly 3.5 million viewers.

Sport is well-known as an important viewing product for broadcasters looking to reach large audiences and a total of over 15.4 million Australians watch some form of sport on TV equal to 76.8per cent  of Australians aged 14-plus – and these viewers are spread across all seven of the Helix Personas communities, however different communities enjoy watching different sports.

Commenting on the study, Roy Morgan CEO Michele Levine, said: “The data shows sport is of interest across the board but that different sports appeal to different community segments. For this reason and the ‘live’ nature of the viewing experience live sport is the most valuable commodity for TV networks battling to retain viewership in an age marked by a proliferation of new broadcast channels. Live streaming via subscription TV services like Netlifx has taken off in recent years, and live streaming sporting events directly to tablets and even the latest iPhone is an increasingly important part of the broadcast mix.

“However, despite the increasing channels consumers can use to view their favourite content, including live sport, the traditional TV media channel remains ‘King’ for the moment and most Australians turn on their TVs when they want to watch the AFL or NRL Grand Final – as shown by two special Roy Morgan Snap SMS surveys conducted immediately following both title deciders in 2017.

“The biennial Olympics remain the top TV sport for Australian viewers with nearly 8.7 million Australians watching the Olympics on TV when they can. The bumper ratings for the just concluded Pyeongchang Winter Olympics in South Korea bode well for the next two Olympics which are both being held in similarly favourable time-zones.

“The 2020 Summer Olympics will be held in Tokyo, Japan, and the 2022 Winter Olympics are in Beijing, China. Channel 7 holds the rights for the Tokyo Games, however, the rights for Beijing are still up for grabs.

“These sporting properties are among the most valuable of content on Australian television and as speculation continues that international media and content giants including Amazon, Netflix, Facebook, Alphabet/Google and others are considering buying broadcast rights for these sporting products Australia’s existing TV networks are likely to continue to pay whatever it takes to hold onto their most reliable viewing products,” Levine said.