Advertise with us
Posted 7 October, 2016


The first major comprehensive study of Australians’ audio consumption has found that the entry of global players such as Pandora, Spotify and Apple Music have failed to dent radio’s dominance of the audio landscape.

Of the time spent with audio, Australians spend two hours and 12 minutes listening to live Australian radio, equivalent to a 64.9 per cent share of listening.

Listening to their own music collections accounts for 13 per cent, while the combined streaming services Pandora, Spotify and Apple Music accounts for just 9.2 per cent.

Online music videos such as YouTube accounts for a 3.7 per cent of share of listening, and podcasts accounted for 3.5 per cent. Listening to “other audio” (including audio books and music playing at locations such as gyms or pubs) accounts for 2.6 per cent, while 2.1 per cent of audio listening is on TV music channels. 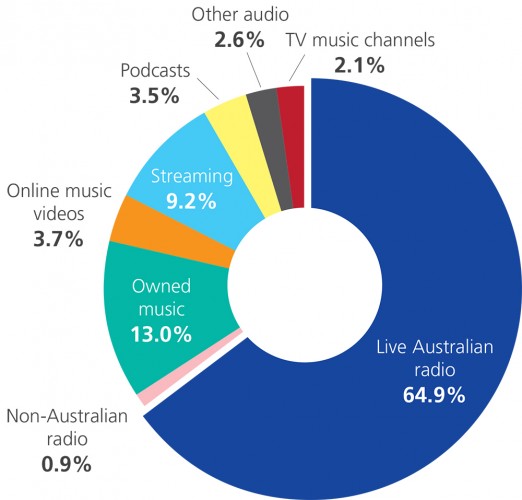 The results of the study were released today at the National Radio Conference in Melbourne.

Tony Kendall, CEO of the Australian Radio Network and chair of Commercial Radio Australia’s (CRA’s) marketing and brand committee, said that as radio is the major player in the audio category, it is important for the industry to understand how the market is evolving so it stays on the front foot of emerging trends.

“Australian radio is operating in a very competitive space with increasing competition from global players,” he said.

CRA chief executive Joan Warner said the findings also showed that radio was dominant across the day for all demographics, including younger listeners.

“The study found 10 to 17-year-olds and 18 to 24-year-olds spend three times longer listening to live Australian radio than Spotify and eight times longer than Apple Music and Pandora each day,” she said.

This research is the first of what will be an annual independent authoritative report into the evolution of the audio sector in Australia and follows in the footsteps of the well-regarded Edison Share of Ear study in the US, which has been tracking audio sector trends for two years in that market.

CRA announced it will launch a new industry marketing campaign next week on the back of the research results to position radio as the most effective audio medium for advertisers.

Four 45-second ads have been created as part of the campaign, which will focus on the facts surrounding the influence of live radio compared to the internet-only music services.