Mother’s Day has come and gone for another year, however, new research has found that our well-meaning gift-giving intentions could be a total waste of money.

Unlike the Brits, Australia celebrates Mother’s Day on the same day as Americans.

And new research out of the States highlights just what a waste of money that Sunday in May can be.

The study was conducted by buying group Coupon Lawn who surveyed 1000 mothers on their views of what made (and what didn’t make) an ideal Mother’s Day present.

Interestingly – as the graph below shows – husbands and partners were considered the worst gift-givers. 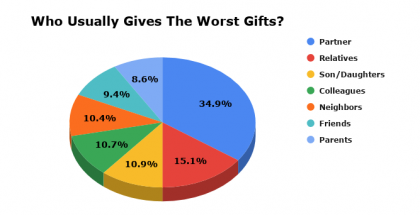 Highlights of the study included:

• 64 per cent of people have disappointed mums for getting them flowers on Mother’s Day. In other words, around $US2.56 million dollars are wasted on flowers yearly.

• Surprisingly, 14.40 per cent of American mothers don’t want jewellery gifts which amounted to $US1.51 million US dollars wasted on Mother’s Day but 34 per cent of people have considered buying it.

• Similarly, 25 per cent of survey takers have also considered houseware or gardening tools as gifts but 19.5 per cent of American mums don’t really like it, amounting to a whopping $US5.27 million dollars wasted.

• The same goes if you’ve considered giving them books or CDs because $US710,000 are wasted due to 11 per cent of mums that dislike those kinds of gifts on Mother’s Day. But 24 per cent of people are still likely to buy them for these occasions. Unless, of course, if they’re personally into reading books and such.

• Gift cards are among the least disliked items on Mother’s Day as only 8.7 per cent of mums don’t like it or $US2.87 millions wasted. So you might want to consider it and be a part of the 49 per cent of people who’ve considered this as a gift on Mother’s Day.

• Some 35.7 per cent of US mums said free gym/yoga online class is the worst gift on Mother’s Day. This is followed by spa vouchers, which according to 25.3 per cent of US moms are the worst.

• Some 7.10 per cent of American moms dislike consumer electronics or about $US2.93 million wasted and if you’ve considered giving your mom this, you belong to the 19 per cent of people who also considered buying them.

• Do you belong to the 26 per cent of survey takers that considered personal services such as spas and salons? Good news for you as only 4.5 per cent of moms dislike this. But this still means $US2.1 million  dollars are wasted.

• But if you wanted to give them the best gift, go out with the family as only 3.4 per cent of American mums dislike this idea but that still amounts to $US4.07 million dollars. This gift has been considered by 46 per cent of people.

• According to the data, 43 per cent of buyers think mums want something unique or different but in reality, only 19.10 per cent of mums are expecting to get this kind of gift.