One of the great joys of an Aussie summer – the pissed cricket streaker – appears to have returned to Channel Nine’s coverage under a bold new editorial direction.

On Sunday night, TV viewers to the fifth one-day international between Australia and England in Perth were treated to the full “meat and two veg” after 23-year-old Ben Jenkins – who later admitted his impromptu actions were the result of a “three day bender” – ran starkers onto the brand new $1.5 billion Optus Stadium during the seventeenth over of the match.

For many years now Nine has adhered to a strict “no wanger” policy when it came to streaking, preferring polite, family-friendly banter between the commentators over any mention of the fleshy spectacle unfolding on the pitch below.

However, on Sunday night, lucky viewers were treated to a full display, including running commentary from Nine spruiker, Michael Slater.

B&T has reached out for comment from Nine regarding its bold new direction, however, had not received a reply at the time of publication.

For his part, Jenkins has said he has no regrets over his decision to be the stadium’s inaugural nudist despite a hefty $5000 fine and subsequent three-year ban from all Cricket Australia matches.

Jenkins telling Perth’s Channel Nine: “I sat there for a long time, I was looking at every security guard and the path I was going to take and I was just thinking, ‘I really don’t want to do this anymore’.  Peer pressure won. When the time was ripe and the clothes came off, there was no turning back.” 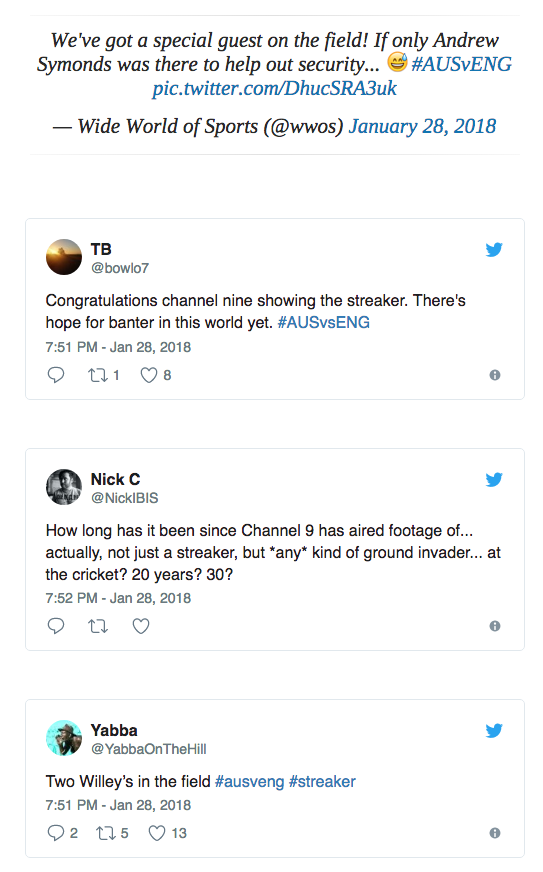