Advertise with us
Posted 6 November, 2019


No-alcohol beers appear all the rage at the moment, with brewing behemoths Heineken and CUB among a number of brewers to launch into the market over the past 12 months.

And you’d think the arrival of a tasty ale that doesn’t get you drunk, make a fool of yourself or crash your car would be overwhelmingly welcomed.

However, a new no-booze brew in the UK appears to be having the opposite effect. 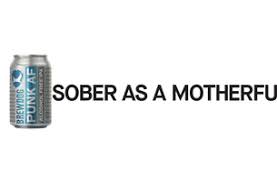 Brewdog’s PUNK AF alcohol-free lager has taken an all-the-more provocative marketing approach with an outdoor campaign that includes the slogan “As sober as a motherfu”.

The brainchild of London creative agency Uncommon, the ads have already garnered a number of complaints from people who regard the slogan as offensive and inappropriate for children to view.

A spokeswoman for the UK’s Advertising Standards Authority revealing the billboards havr received a total of 14 complaints, namely from mothers concerned with about one location’s proximity to a London primary school.

“We have received 14 complaints where complainants challenged whether the ad was likely to cause serious or widespread offence,” the spokeswoman said.

“Ten complainants also challenged whether the ad was inappropriate for display in a medium where it could be seen by children. We are currently investigating and will publish our decision in due course.”

In further bad news for Uncommon and the brewer, Brewdog’s previous agency, Manifest, claimed it actually pitched the idea of a no-alcohol beer to the client earlier this year only to have it rejected at the time. Brewdog has denied the claim.