Last year’s record spend was exceptional, with the Financial Services Royal Commission, Commonwealth Games and various by-elections and state elections all combining to deliver a record level of ad spend. In contrast, this year the market has been plagued by a lack of business confidence, global political uncertainty and a tighter credit market post the Royal Commission. 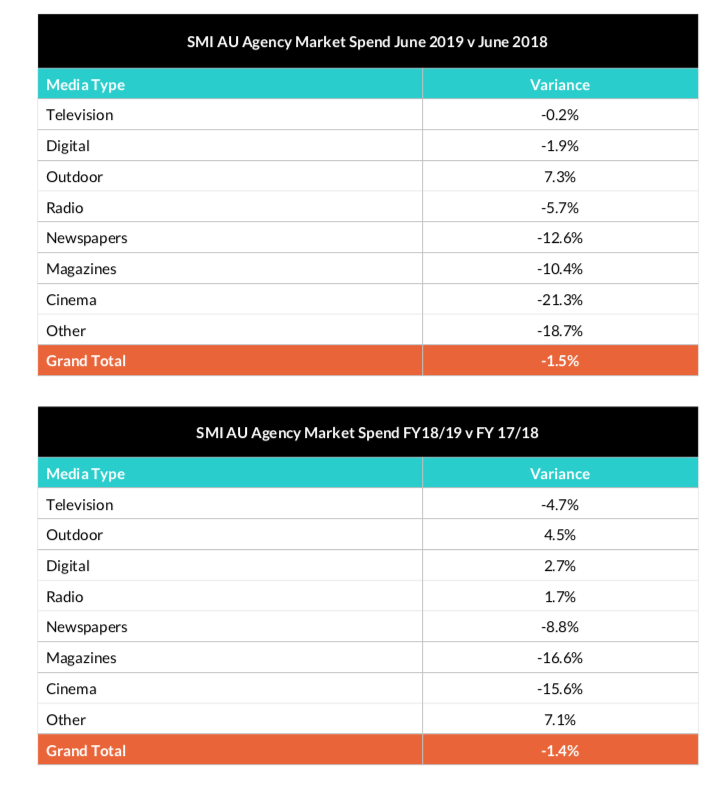 Despite that, record levels of financial year ad spend are being reported by the digital (up 2.7 per cent), radio (up 1.7 percent ) and OOH (up 4.5 per cent).

Ten product categories also reported record expenditure levels in FY2018/19, led by the political parties/unions category (more than doubling ad spend to $101.4 million due to the Federal election) while retail’s media investment moved above $700 million for the first time and travel’s grew to now be above $400 million.

In June the market failed to move back into positive territory due to lower-than-expected level of late digital bookings, with that media reporting a 1.9 per cent fall in June bookings while the overall market was back 1.5 per cent.

Outdoor reported the only significant June gains (up 7.3 per cent ) although metropolitan TV bookings are up 1.8 per cent if SBS’ results are removed to normalise for last year’s Soccer World Cup broadcast.

SMI AU/NZ managing director Jane Ractliffe said the difficulties of the past financial year had resulted in an unusual situation where SMI was reporting lower demand for each of the June month, June quarter (-2.8 per cent) first half (-2.9 per cnet) and also for the financial year period.

“As SMI’s data history has shown, it’s very unusual for the Agency market to not grow and it’s taken an unprecedented number of negative events to deliver this knock. But we’re seeing numerous local and global issues come into play at the same time which have had the combined effect of significantly reducing business confidence and therefore ad spend,’’ Ractliffe said.

“At least in June we are starting to see improvement as the 1.5 per cent decline is the lowest reported since November last year when you exclude the month May given the abnormal Election impact that month.’’

In June, SMI is reporting record levels of ad spend for each of the auto brand, retail, insurance and travel categories with those gains offset by large declines in ad spend among gambling advertisers, the domestic banks and food/produce/dairy categories.

And for the financial year, apart from the retail, travel and political parties reporting record levels of ad spend this feat was also achieved by the categories of automotive brand, consumer electronics, utilities and home furnishing/appliances.