The Monkeys are renowned for their Australia Day ad spot for Meat & Livestock Australia (MLA), and 2017 will be no different, with the agency set to shake the tree and promote the good ol’ fashioned Aussie BBQ. But somehow, BuzzFeed News has obtained a leaked script of the ad in its early draft stages.

While this year’s ad – which caused unprecedented controversy – was focused on calling meat lovers back to Oz, and another MLA campaign aimed to showcase the nation’s diverse population, 2017 is set to take a new approach to the beginning of Australia’s history.

According to the script, the commercial will be titled ‘The First First Fleet’, and opens with the arrival of Aboriginal people in canoes, landing on the shores of an empty Australian beach. The subtitle “Arrival of the first fleet Terra Australia, late January, 58,000 B.C. (ish)” appears on screen.

A description of the commercial said, “Starting with the First First Fleet 60,000 (ish) years ago, this film celebrates all the new arrivals who have contributed to making Australia the great place it is today, as they get together over a lamb BBQ. It’s the first united celebration of Australia”.

You can see screenshots of it on BuzzFeed and below: 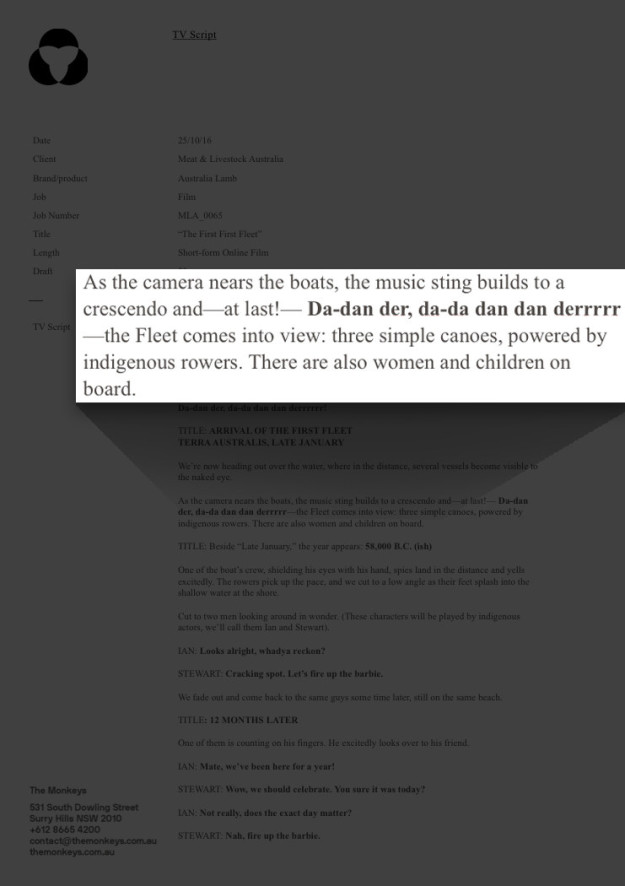 Two Aboriginal people – Ian and Stewart – are the first to step onto Aussie shores, with one commenting, “Cracking spot. Let’s fire up the barbie.” The characters then decide to have another BBQ a year later to celebrate Australia Day, before being joined by other fleets of Dutch, British, French, German and Chinese.

But per BuzzFeed, The Monkeys are running into a spot of trouble regarding casting, as most Aboriginals don’t celebrate Australia Day, instead aptly referring to it as Invasion Day.

A spokesperson from MLA told B&T, “We understand there is always a high level of anticipation and interest in MLA’s upcoming lamb advertising campaign, and the 2017 instalment is no different.

“It’s important to note that media reports have made reference to an early draft of a script dealing with one creative idea.

“MLA always consults widely in the development of our marketing campaigns as we continually strive to be inclusive of all Australians.

“The “We Love our Lamb” campaigns, and MLA as a company, are committed to celebrating diversity and we look forward to sharing our latest ad with all Australians early next year.”

Another scene apparently featured Kevin Rudd making light of the apology he delivered to the Stolen Generation in 2008, with Rudd seen bumping into a crowd of Aboriginal people and repeatedly saying, “Sorry”, to which someone responds, “We know, Kevin”. 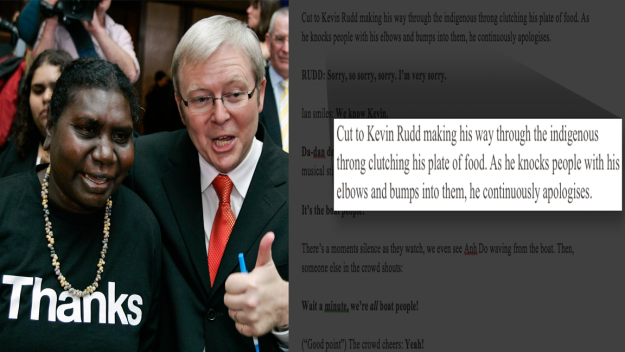