In this guest post, Edge’s digital manager, Inez Zimakowski (pictured below), admits programmatic’s not without its teething problems, but it will ultimately prove the best option for brands and their agencies…

Online advertising has come a long way since the first banner ad went live in 1994. Click through rates are down, costs are rising, and it’s getting harder and harder to get cut through in an increasingly competitive environment. 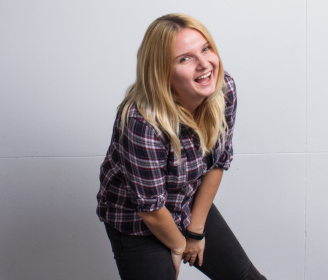 But it’s not all doom and gloom – a whole new suite of platforms, ad formats and targeting options are available to us now that the marketers of the ’90s didn’t have. I don’t know about you, but I’m pretty glad I’ve never had to hard code a banner into a website and manually swap them out every day.

I’m also very happy that banners no longer look like this. Allegedly, this banner had a 44 per cent CTR. Unimaginable these days, especially for something like this, #clickbait. Why the multi-coloured text and arrow, Modem Media?

Still, despite its heinousness, that banner ad sparked an advertising revolution, and it has spawned ad networks, Adwords, ad exchanges, DSPs, SSPs, and a bunch of other acronyms.

In all of this, programmatic advertising was born. From ads going direct from brand or agency to publisher, we suddenly had the middlemen, the DSPs from the buyer side, the SSPs from the publisher side, and the ad exchange in the middle. Meant to make life easier for both publishers and buyers alike, the lack of transparency around costs, bids and who was actually seeing the ads left buyers and publishers in the dark about what was going on. The good thing was that we also had an automated way of buying massive amounts of inventory, and optimising the buying and bidding process.

Programmatic has been the subject of much scrutiny, particularly in the last 18 months, with fraud and transparency becoming increasingly bigger problems.

When we buy ads, we all want them to be seen by a real person, otherwise what’s the point? But questions around bots have been thrown around a lot lately in the programmatic space, with an estimated 52 per cent of total web traffic in 2016 being from bad bots. The World Federation of Advertisers is also predicting that by 2025, ad fraud will be costing advertisers an insane $US50 billion globally.

Now fifty billion is a lot of money to be spending on non-existent users, and advertisers have called on the industry to clean up the mess before it gets to that point. Even now, there are billions being spent on bot traffic on dodgy websites, with the IAB and EY declaring that in the US, ad fraud costs the advertising industry $US8.2 billion annually.

So, what can we do about it, and who should be responsible?

On one hand, there are those saying that the advertiser should bear responsibility; after all, it’s their money. That’s a bit of risky logic if you ask me, because it means the advertiser has to wait until after the fraudulent activity happens and has been paid for, and then what? It’s also going to start a chargeback process nightmare that no one wants.

On the other hand, it should be the ad networks’ problem, given they are the middleman supposedly vetting publishers in their portfolio. Here we meet another issue in the industry, transparency. Should ad networks be providing more detail about their portfolio and telling advertisers who is delivering fraudulent traffic? More importantly, should they then allow advertisers to block these sites from their whitelists? We think so.

Looking at transparency as another issue, and one of the biggest questions from buyers has been ‘how much of my ad dollar is actually going to the publisher?’. If everyone is now getting a slice of the pie, who’s losing out, and should you switch providers if they’re taking a huge cut? The lack of transparency in the buying chain has been a roadblock for many brands, and lifting the veil of secrecy will go a long way towards alleviating the trust issue.

Then we’ve got the much-touted ‘ads.txt’ file, or Authorised Digital Sellers for the uninitiated. The short, simple piece of code was developed by IAB to help increase transparency in the advertising industry by allowing publishers and distributors to publicly declare who is authorised to sell their inventory. What happens if your seller is selling you inventory but isn’t on that sites list? Well, your seller might be a little dodgy as they’re selling something they technically don’t have the right to sell.

Want to check if the inventory you’ve bought is legit? Just go to the publisher site in question, and add /ads.txt to the end of the URL. If they have the tag implemented you’ll be able to see if your seller is listed there!

What does it look like? Here’s the HuffPost one! 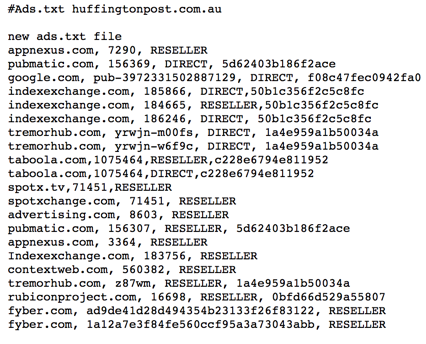 Pretty, right? But at least we can clearly see who can buy directly with HuffPost, and who has the authorisation to resell their inventory.