A new study has revealed something that shouldn’t come as a shock to too many people – Americans love their fast food.

The study, by CDC’s National Center for Health Statistics (you can read it in full here), found that almost 40 per cent of Americans admit to eating fast food every day.

Researchers looked at the fast food eating habits of Americans between the period 2013 and 2016 and found 37 per cent of adults said they’d consumed fast food in the past 24 hours.

It was younger people – those aged 20 to 39 – which was the demographic most likely to gobble down a Whopper and fries. 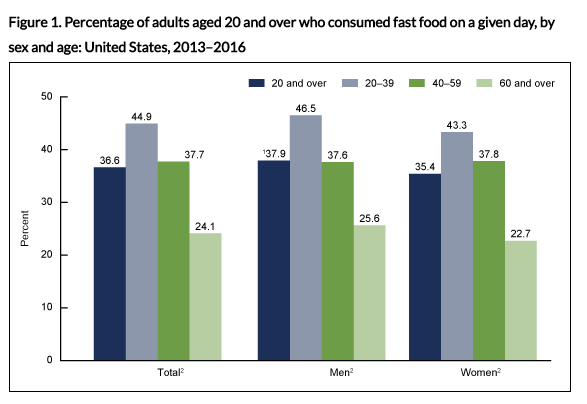 The study found that as people got older they tended to eat less junk food. More surprisingly, the study debunked the idea that fast food is generally eaten by people from lower economic and social backgrounds.

According to the findings, the more money someone had, the more they were likely to eat fast food.

When it came to gender, men were most likely to buy fast food for lunch, while women would purchase it as a quick and inexpensive snack.

Of all respondents, 43.7 per cent said they bought fast food for lunch, it was 42 per cent for dinner, while 22.7 per cent opted for the breakfast menu.

“Fast food consumption has been associated with increased intake of calories, fat, and sodium. A previous report estimated that adults consumed 11.3 per cent of their total daily calories from fast food. Consumers can find nutritional information on calories on the menu in most fast food establishments and restaurants.”