In this opinion piece, Jeanne-Vida Douglas (pictured below), an executive producer at integrated brand storytelling agency Filtered Media and co-host of The CMO Show podcast, takes a look at the latest MLA lamb ad and says it’s wrong to dismiss the work as merely caricature…

If you haven’t seen the ad, check it out here.

Pass the popcorn as Australia’s favourite ad sends conservative commentators into a tailspin to the delight of Meat and Livestock Australia’s group marketing manager Andrew Howie. 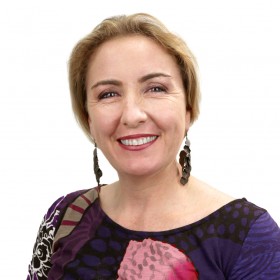 And that’s just the way Andrew Howie likes it. He’s comfortable out at the edges where most marketers refuse to play. And while it looks like a dangerous place to be, Howie reckons there’s more to lose by holding onto the boring middle ground.

“The opportunity is for all brands, or all marketers just to be a little bit better than they were before. If everyone has a continual improvement philosophy, eventually everyone’s standards are going to get better,” Howie said as a recent guest on The CMO Show podcast.

“But if you’re just happy doing what you’ve done before, I mean, how boring? Don’t have a senior marketing job. Just be a middle of the road marketer and get out of the way, because the world’s changing and it’s changing quickly.”

The controversy around this latest instalment of MLA’s campaign began back in November, when a poorly timed script leak left Howie and his creative compadres at The Monkeys scrambling to adjust the narrative in the last weeks of production. Criticisms of the leaked script were similar to those expressed in previous years.

“The key feedback from last year was vegans hate Australia Day ads, that was probably a big piece of feedback, and concerned Australia have an ability to mobilise very quickly,” Howie said referring to the response from human rights advocacy groups focused on indigenous issues.

“But we also realised that there’s an element of the community that, no matter what we do, will object as long as Australia Day’s celebrated on the day it is.”

And the fix when it came, was ingenious. Rather than getting bogged down in arguments as to whether the 26th of January should be celebrated as Australia Day, or Invasion Day, Howie and the team simply sided stepped the issue. A scene featuring ex-PM Kevin Rudd apologising as he moved through the crowd was pulled, and the ad itself makes no explicit reference to Australia Day, it’s just a group of people having a BBQ in the best spot in the world. Howie’s creative team even offered a conciliatory wave to vegans, who’s life choices have been ridiculed in past campaigns.

Don’t make the mistake of thinking that controversy for controversy’s sake is the goal, Howie puts a good deal of thought into whose buttons to press, and how far he can go to create enough of a stir without pushing the pot over.

“At the top of the funnel, at the emotional end of stuff, we’re very much about creating connection and getting people to think differently, building meaning for our products,” Howie said.

“The biggest problem we’ve got for lamb is that our population is ageing. All those who’ve grown up in Australia eating lamb are heading towards retirement age. Then when you think of a meat, people go ‘beef’. We’ve got that, but the problem is, when you go, ‘What’s for dinner?’ They go, “Chicken’ This is the real problem.”

The Australia Day ads, and ensuing controversy, is really about creating the groundwork to ensure lamb is integrated into the weekly shopping basket of a young and culturally diverse audience. The gamble is that the edgy, funny, irreverent tone of the ads makes them memorable enough to shift behaviours not only on Australia Day, but every other shopping day of the year.

Howie is paying close attention to whether or not it’s paying off.

“If the ROI is there, the industry will continue to support us, and our business will continue to allow us the freedom to be progressive,” Howie said. “You need to be respectful of that, because pushing boundaries for the sake of it and being a maniac, you’ll get found out, but if you’re conservative in the way that you’re crazy, then hopefully not.”

And so long as conservative crazy keeps delivering results, it’s the right place to be.