The former leader of the opposition and now media commentator, Mark Latham, has claimed a current defamation case against him is “lawfare” and is designed to break him financially.

Latham is being sued for defamation in the Federal Court in Sydney by Osman Faruqi (below), a former Greens staffer and a journalist for the pop-culture site Junkee. 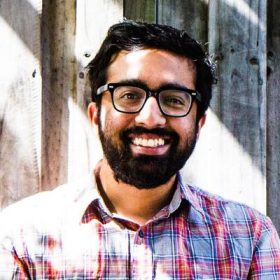 In August, following the citizenship controversy that led to the resignation of Greens senators Scott Ludlam and Larissa Waters, Faruqi tweeted to his friend and Muslim commentator Yassmin Abdel-Magied: “The white people are getting f*cked. Yas, it’s happening.”

Latham responded to the tweet on his own Outsiders YouTube program, which he set up after being fired from Sky News in March, saying Faruqi’s comments were “celebrating anti-white racism in Australia”.

“These people are fomenting hatred of white people … and, as such, they are effectively encouraging the terrorists in this political environment to do their worst,” Latham said.

Faruqi took issue with the comments and sort damages against Latham saying Latham’s comments suggesting it inferred Faruqi “knowingly assists terrorist fanatics who want to kill innocent people in Australia”; that he “condones the murder of innocent people by Islamic terrorists” and “encourages and facilitates terrorism”.

Speaking outside the court yesterday, Latham described the case as, “Expensive, that is what lawfare is,” he said. “It’s not just a legal issue, there is a political dimension where they are trying to break me financially and Mark Latham’s Outsiders.”

Latham added that he felt the case was worth fighting for because “if we can’t live in a country where you can’t object to anti-white racism then something has gone wrong with our values”.