Sure, the article offers some top nutrition tips for dieters – eating fruit and a hearty porridge breakfast, as an example.

The only problem is Griggs claims she never gave the interview to the Bauer-owned magazine, has never done any of the tips suggested in the diet, and hasn’t lost the mooted five kilos either!

Yesterday, the Channel Seven personality tweeted the apparent absurdity of the article, calling it a contender for “The Moronic Award For Made Up Shite”.

Worse, the article features two photos of Griggs – one deliberately heavier-looking than the other – that attempt to vindicate the merits of said fabricated diet. 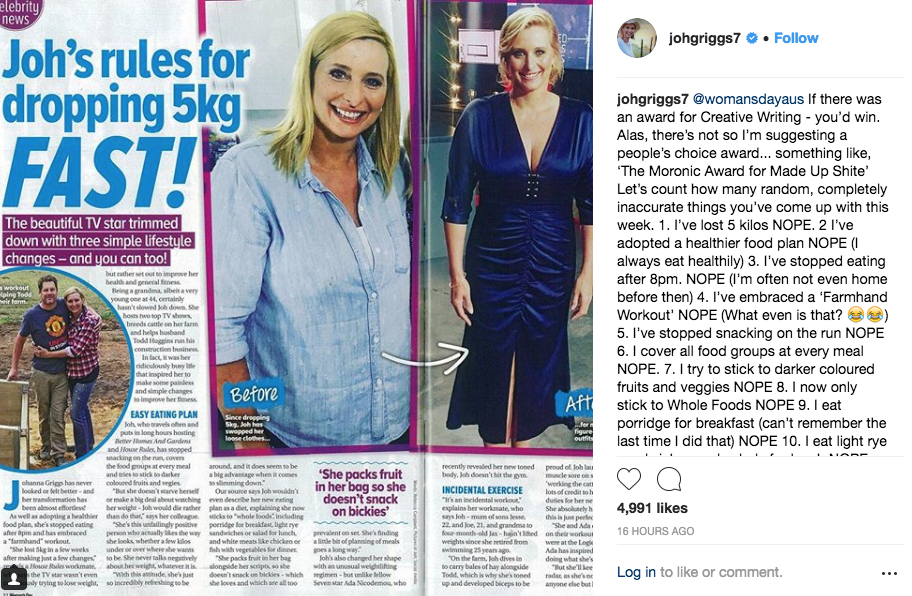 “Let’s count how many random, completely inaccurate things you’ve come up with this week,” Griggs railed in her post.

“I’ve stopped eating after 8pm, NOPE (I’m often not even home before then) … I’ve embraced a ‘Farmhand Workout’, NOPE (What even is that?)

“I eat porridge for breakfast (can’t remember the last time I did that), NOPE … I eat light rye sandwiches and salads for lunch, NOPE … I pack fruit in my bag so I stop snacking on biscuits on set — again — that would be a NO.”

Griggs then lists some 14 made-up “rules” that Woman’s Day claims she abides by, none of which Griggs admitted to ever doing.

“Funnily enough the last two things you say I don’t do – I actually do – so by my calculations you have managed to write an entire article that is 100 per cent inaccurate,” the clearly aggrieved Griggs wrote.