When it was allegedly revealed former rugby league star Beau Ryan had had a bit of a romp in the sack with former Hi-5 member Lauren Brant by Women’s Day, Woolworths was quick to drop Ryan as ambassador.

While B&T has not heard back from Woolworths, the Daily Mail appeared to have an exclusive statement from the supermarket giant confirming Ryan’s dismissal from its ‘Woolworths Connect’ campaign.

Social analytics platform Isentia crunched the numbers for B&T to show how Woolies skipped out of the scandal virtually unscathed.

The story of Ryan first broke September 7, and while much of the social media sentiment surrounding Ryan was predictably negative, Woolies barely had any mentions. The wordcloud from Isentia below shows which words were trending the most when the scandal buzz was alive. 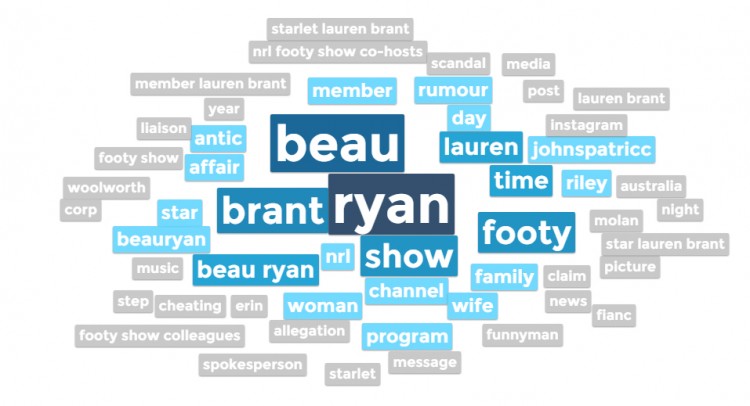 According to Isentia, Woolworths and Ryan were first mentioned together on September 10, three days after the story broke, and then again a few times after when the supermarket announced it was dropping him.

However, that remains virtually it. Because Woolworths would have someone constantly tracking what is being said about the brand on social media, it meant the team quickly discovered the issue and handled it. 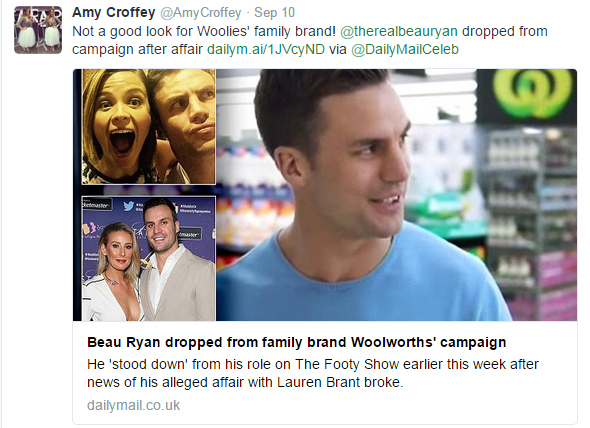 “Keeping across issues as they emerge and responding accordingly is imperative to protecting a brand,” said Isentia’s Australia and NZ chief executive, Sean Smith.

When it came to Ryan however, it was a massive virtual bitch slap. There were 2101 mentions of him and the affair the week after it was revealed, with the retweets generating 1597 extra mentions across social media.

It had been reported Ryan was dropped from The Footy Show, however this appeared to be incorrect.