Unsurprisingly, Apple is the world’s most valuable brand while here in Australia Telstra has leapfrogged Woolworth’s to become our most valuable local brand according to the report by the brand strategy and consultancy firm.

Seven of the fastest growing brands in the world are now Chinese-owned.

When it came to the world’s most powerful brands, Disney usurped Lego for the number one spot for 2016. Eight of the 10 most powerful brands in the world are US-owned. The report said Disney captured top spot due to its numerous recent acquisitions. “Its now dominant position is the result of its many acquisitions and the powerful brands it has brought under its control. ESPN, Pixar, The Muppets and Marvel are all now Disney owned, but perhaps its most important acquisition of all has been Lucasfilm, and thus Star Wars. Star Wars Episode VII ‘The Force Awakens’ has broken countless box office records, becoming the fastest to take US$1 billion, enjoying the most successful opening weekend ($529 million) and based on its total box office gross of nearly US$2 billion is Disney’s most successful film ever. Meanwhile Star Wars toys have generated over US$700 million.” 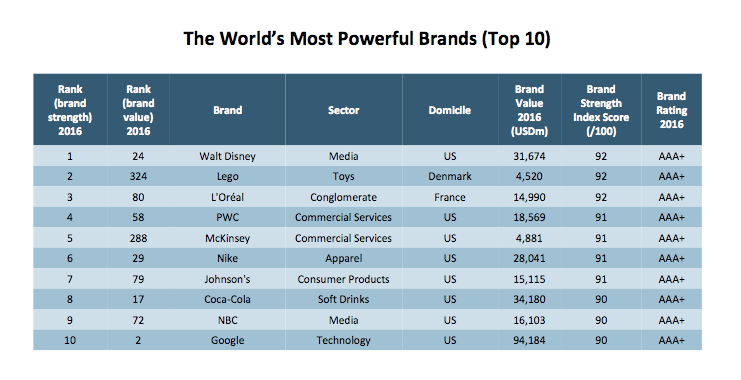 When it came to the planet’s most valuable brands, unsurprisingly the top 10 was ruled by the predictable tech companies. Apple was in top spot with the report noting: “Apple has maintained its dominance at the summit of the Brand Finance Global 500. Brand value is up 14 per cent, thanks to the huge success of the iPhone 6 and recently released iPhone 6s. Revenue for Q4 of the fiscal year 2015 was a record-breaking US$51.5 billion with profits at US$11.1 billion while revenues for the year were US$233.7 billion.” 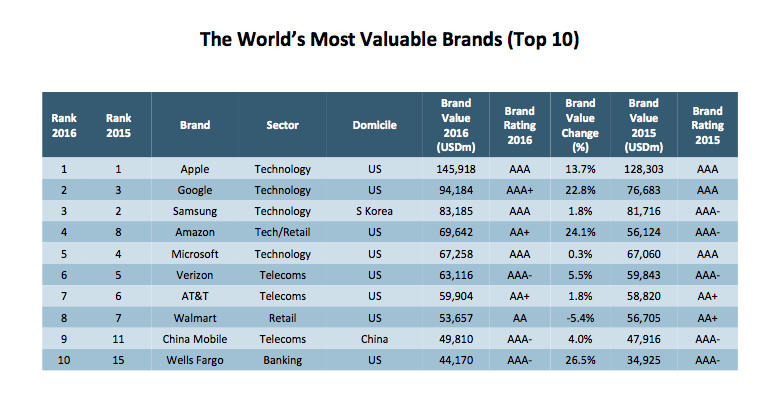 In Australia Telstra is our most valuable brand. The report noted: “With a 23 per cent increase in brand value and underpinned by a cohesive customer advocacy strategy, Telstra has gained the top place for Australian brands. Brand Finance Australia managing director, Mark Crowe, said: ‘As flagged in last year’s result, Telstra is now Australia’s number one brand despite increasing competition especially in the mobile division. It is testimony to Telstra’s continued brand strength which has driven a 23 per cent increase in value despite only a 3.6 per cent increase in revenue’. Telstra has also climbed 35 places to be ranked 110 in the Global 500.”