Advertise with us
Posted 8 February, 2016


Australian consumers are sinking $181 a month into the digital services according to a new study by financial firm Ernst & Young (EY). And that’s on top of the typical investment of $782 in hardware costs to keep them connected.

Called Digital Australia, State of the Nation 2015-16, the report found that the bulk of the money is spent on ISP fees and smart phone bills while music and movie streaming captures a little over 10 per cent of the spend. 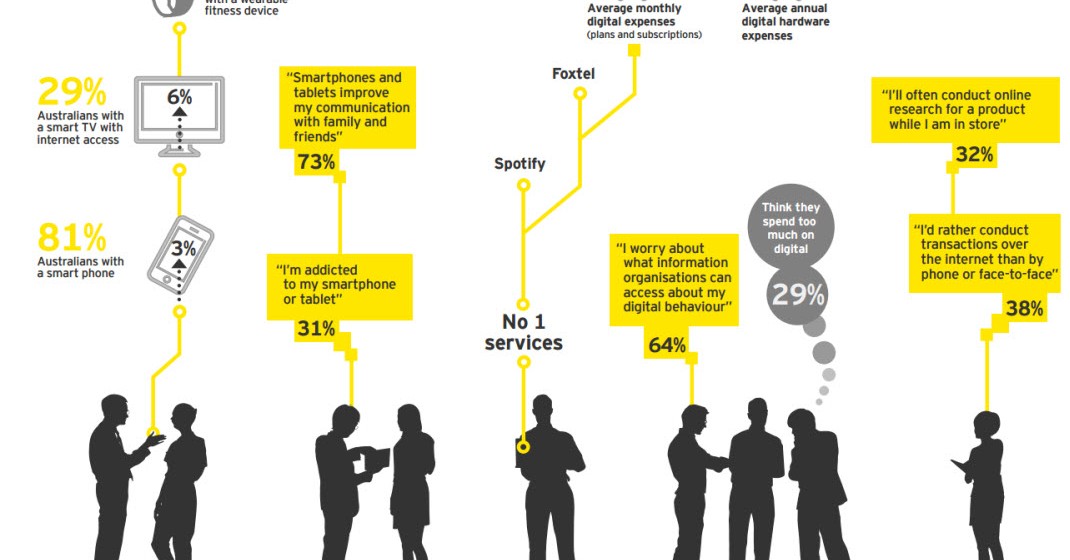 According to the authors, “The majority of consumers (63 per cent ) are comfortable with the amount they’re spending on digital, with less than a third (29 per cent) concerned they spend too much.”

They also argue that the level of comfort is being assisted by telecommunication providers keeping customers informed, “…making usage data available and including more data and services in plans and bundling.”

And there was an interesting insight into the mindset of the digital obsessives among you. “Those who believe they are not spending enough money on digital are spending more than those who are comfortable with their digital spend and those who feel they are spending too much. This reflects the increased engagement of “digitally active” individuals, and shows a greater appetite for new devices and the latest technology.”

Two of those findings seem logically inconsistent. The idea that many many organisations are yet to get the basics right seems to jar with the idea that digital transformation is rife. That’s not to say the research is wrong. Rather it suggests that those programs are in their very early stages.

According to David McGregor EY technology, media and entertainment and telecommunications leader, “In a world where digital solutions are playing an increasingly central role in customer engagement, boards and C-suite leaders need a new set of operating metrics to understand if investing in digital is delivering dividends.”

The report also delved a little into the digital downside. The authors say that when they spoke to everyday Australians, an interesting tension was revealed. “The digital world brings profound benefits, but Australians also see its dark side.”

For instance, although digital can support inclusiveness and a sense of connection, consumers questioned the depth of these connections. A significant minority also felt overwhelmed by the information available to them while “digital addiction” was also an important gripe.